Google Pixel 7 vs older Google phones: Should you upgrade? 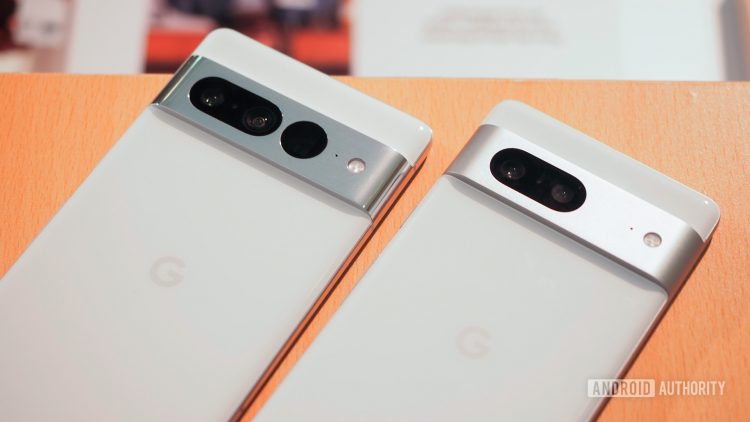 Google returned to proper flagship territory last year with the Pixel 6 and Pixel 6 Pro and continues the trend with the Pixel 7 series. The Pixel 7 and 7 Pro are iterative updates, but that’s not necessarily bad for a company whose biggest problem is consistency. Of course, you get the expected upgrades with faster processors, a more refined design, and the latest software package.

The Pixel 7 and 7 Pro aren’t massive overhauls and don’t stray from the formula Google established last year. This brings up the interesting question, is the Pixel 7 series worth the upgrade if you have an older Google phone? We pit Google’s latest against everything that’s come before to find out.

Read more: Everything you need to know about the Pixel 7 series

Google Pixel 7 vs Pixel 6a

The Pixel 6a is Google’s latest addition to its popular “a” series. Like the other devices in the line, the Pixel 6a borrows the best elements of its flagship namesake, including the new design language and the Tensor processor, while cutting costs everywhere else to make it one of the most affordable Pixels you can get your hands on. The Pixel 6a and the Pixel 7 series are in two completely different smartphone categories, so it’s no surprise that the latest flagships are objectively better phones.

The Pixel 7 series gives you better build quality, a faster processor, more RAM, higher storage options, and wireless charging. And the smaller phone’s dual camera setup with its 50MP primary camera is better than the 12MP cameras you get with the 6a. You can also make the jump to a three-camera system with the 7 Pro. The 7 and 7 Pro also have larger displays with higher refresh rates. The only thing common between the three phones is the software, with all of them eligible for the latest versions of Android for the next three years, along with security updates for the next five.

See also: The best affordable Android phones you can get

The Pixel 7 and 7 Pro are definitely better compared to the Pixel 6a. But if you’ve already bought the latter this year, you’re probably not looking to upgrade. Yes, the Pixel 6a isn’t as good, but it’s got good cameras, solid performance, an excellent software experience, and even extras like water resistance. More importantly, it’s half the price of the standard Pixel 7. The Pixel 6a is an excellent choice for anyone looking for a budget-friendly phone. But if you want the latest and greatest, the Pixel 7 series is the way to go.

The Pixel 6 series and the 6 Pro, in particular, was Google’s return to the flagship space after its mid-range predecessor. The series brought a much-needed upgrade to the Pixel line, with the 6 series featuring an all-new design, a homebrewed processing package, more RAM and storage than previous devices, and a superior camera system, especially with the Pro.

For seemingly the first time, Google decided to stick with the tried and tested formula with its latest Pixels. The Pixel 7 and 7 Pro carry a lot of the design language and hardware from their predecessors, so it’s not the overhaul that some hope for year after year. While the spec sheets might look the same, key upgrades across the board exist.

The Pixel 7 and 7 Pro come with displays that are 25% brighter, making the vivid colors pop even more. The new and faster Tensor G2 powers the two phones, and the more refined design with a metallic bar and single-tone colorways make for a less flashy but still premium look. And even though the camera hardware is similar, you get plenty of new and exciting camera features with the latest Pixels.

The Google Pixel 7 and 7 Pro have a lot going for them, but if you already have their predecessors, there’s no reason to upgrade. In fact, we include the 6 and 6 Pro as viable alternatives to get instead of the latest Pixels if you want to jump into the Pixel world while saving some money. Newer is better in this case, though. It also helps that the new Pixels are available in many more countries this time. So while you don’t need to upgrade, if you were waiting to buy a new phone, the Pixel 7 and 7 Pro are the way to go.

Google Pixel 7 vs Pixel 5a

The Pixel 5a was an exciting addition to the “a” line. Instead of being a cheaper alternative to its flagship counterpart, like other phones in the series, it replaced the Pixel 5 and the Pixel 4a 5G. Despite being released last year, the 5a has the same processing package as Google’s 2020 releases, looks the same, has similar hardware, and offers an identical software experience.

The Pixel 7 and 7 Pro are, unsurprisingly, solid upgrades over the Pixel 5a. The new design stands out, the Tensor G2 chip offers better performance, and you get a superior camera package. Of course, there are also flagship extras like more RAM, storage, wireless charging, and a better IP68 rating for dust and water resistance (compared to IP67 for the Pixel 5a).

Even then, it’s probably too soon to upgrade from the Pixel 5a unless you can get a good deal on a trade-in. The Pixel 5a will get a couple more Android software upgrades and four more years of security updates, so it won’t be left behind. It’s not the most powerful and will start to show its age sooner than a flagship. But until it does, you can safely hold on to it.

The Pixel 5 was Google’s attempt at doing something different during a time when true flagships were only getting more expensive. It was a mid-range device through and through, but Google’s AI smarts for the camera and the software experience made for a far better phone than the specs or its price point would suggest. It’s no surprise that despite falling well behind the competition on the specs sheet, the Pixel 5 was still an incredibly popular device in 2020.

Because of its mid-range nature, it’s no surprise that the Pixel 7 and Pixel 7 Pro are better than the Pixel 5. The vanilla Pixel 7 is a closer comparison, with similar features like a 90Hz display, dust and water resistance, and wireless charging. The Pixel 7 brings more power to the table, has a more modern design, and has a much better camera package. It’ll also get more software upgrades, which is to be expected with a newer phone.

The Pixel 5 holds up quite well a couple of years later and will get another major software upgrade and a few more years of security updates. You don’t need to upgrade from the Pixel 5 unless you want to.

Google made a lot of interesting but ultimately divisive choices with the Pixel 4 series. The unsightly notch from its predecessor was gone, but the forehead returned, this time with a lot of tech in tow. The Motion Sense and Soli radar system helped with Face Unlock. But that led to Google completely removing the fingerprint scanner from these phones. Seeing how every future Pixel brought back the fingerprint sensor, it was obviously not a great decision at the time.

The Pixel 4 and 4 XL were the first in the series to come with a dual-camera system and 90Hz display refresh rates. The camera proved to be the only saving grace for otherwise poor devices. They were costly, had plenty of software bugs and glitches, and to say that the battery life was disappointing is putting it kindly.

The Pixel 4 series hasn’t aged well, so it’s probably time for an upgrade.

The Pixel 4 series is three years old, and flagships usually last longer. Unfortunately, these phones haven’t aged particularly well, with people still complaining about battery-related problems and software issues. It’ll get Android 13, but that’s also the end of the road as far as major upgrades go.

So if you’re looking for an upgrade, now is a great time. The Pixel 7 series is better in every way, and while it likely won’t be a stranger to its share of bugs, Google has done a much better job of refining and improving the overall experience.

The high price points of the Pixel 3 series were a huge point of contention when the phones were released in 2018 and led, in part, to the introduction of the “a” series. Of course, other phones were priced similarly, but most offered a lot more to justify their thousand-dollar price points. That’s not to say that Google didn’t try, though.

The Pixel 3 wasn’t a vast improvement, but the Pixel 3 XL introduced a handful of new features, even if not all of them were greeted kindly. The colossal notch looked out of place even on a 2018 phone. But it did house a dual-camera setup to cover all your selfie needs. You also have the premium build quality, dust and water resistance, and wireless charging. The phones weren’t bad, but just far too expensive.

See more: How Google’s Pixel pricing has changed over the years

Now is the perfect time to upgrade if you’ve held onto your Pixel 3 or 3 XL. The older Pixels will no longer receive major Android upgrades (the last was Android 12) and will reach the end of the security update cycle next year. The Pixel 7 and 7 Pro bring a lot of what might have enticed you to the Pixel 3 XL a few years ago. You’ll get a new design, fantastic cameras, beautiful displays, and a smooth software experience. They are also cheaper than the Pixel 3 series was at launch if that makes your decision easier.

Should you upgrade to the Google Pixel 7 series?

Whether you should upgrade has always been easy to answer for the Pixel line because every phone is different and new. The Pixel 7 series is the first that is an iterative update, similar to what we’ve seen from Samsung and Apple over the years. That’s definitely not a bad thing. But it also means you don’t have to upgrade to the latest Pixels if you have the Pixel 6 or Pixel 6 Pro. Yes, you’ll get a better camera experience and a faster processor. Everything else is mostly the same, though. So unless there’s a great trade-in deal on offer, you don’t need to make the jump yet.

You can also safely hold on to the Pixel 6a, Pixel 5a, and Pixel 5 for at least a year or two. The Pixel 7 series is better than these phones in every way. But most of these would be recent purchases. Even if they are mid-rangers, you don’t need to upgrade your phone every year or two. But if you are still rocking a Pixel 4 or Pixel 3 series phone, now is the time to jump to the latest that Google offers.

Will you be upgrading from an older Google smartphone to a Pixel 7? Let us know in the comments!

What If the Metaverse Is Better Without Virtual Reality?