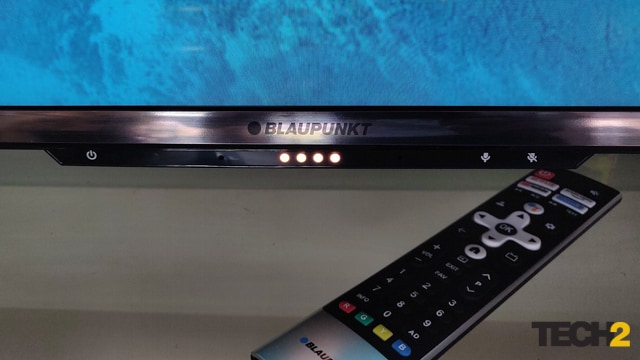 Earlier this week, we reviewed a 55-inch Thomson QLED TV and we quite liked what it offered for a reasonable selling price. We now have its 50-inch QLED cousin from popular German brand Blaupunkt that offers a couple more tricks like better audio output and far-field microphones for hands-free voice commands. No, Thomson and Blaupunkt aren’t related (not that I am aware of), but Super Plastronics holds the brand licence for both in India, hence the familial reference. Time to see if Germany can score one over France in this clash of QLED TVs.

Blaupunkt 50QD7010 QLED TV – Design and connectivity: 7/10
The design of this TV is aesthetically pleasing with a near lack of bezels on three sides and a metallic strip running across the bottom bezel. Below it is a trapezoid chin that hosts a bunch of LEDs and receivers for far-field mics, along with a power LED and IR receiver. All these elements make it stand out from several other budget TVs. Just like the Thomson, the connectivity ports are located closer to the centre of the TV rather than near the edge, making them hard to access if you wall-mount it.

The TV can be wall-mounted or placed on a desk using the bundled mount or the metal stands respectively. The stands feel sturdy and hold the TV firmly in place without a wobble. You don’t just get a voice-enabled remote in the package but also far-field microphones on the TV that let you issue voice commands without pressing any button. More on both a little later. The necessary screws and a pair of AAA batteries are present in the package.

The connectivity department is almost identical to the Thomson QLED TV with most of the basics covered, barring one. You get three HDMI ports, one of which supports ARC, but no HDMI 2.1 ports here either. We believe every 4K TV launched in 2022 should have those. Beyond that, you have two USB 2.0 ports, Optical audio out, A/V input and a LAN port. Analogue audio output like a 3.5 mm headphone jack or a coaxial A/V out is missing. Wireless connectivity options include Bluetooth 5.0 and dual-band WiFi with support for 2.4 GHz and 5 GHz networks.

Blaupunkt 50QD7010 QLED TV – Features and specifications: 8/10
As you know by now, this Blaupunkt QLED TV has a 50-inch panel with a 4K resolution of 3840 x 2160 pixels and a 60 Hz refresh rate. The panel type and peak brightness aren’t mentioned. All popular HDR formats like HDR10/10+ as well as Dolby Vision are supported here, which is great for a budget TV. The panel offers 10-bit colour depth with the capability to display over a billion colour shades; another big plus.

This TV is powered by a Mediatek MT9602 processor with four Cortex A53 cores with a maximum speed of 1.5 GHz and a Mali G52 GPU. You get 2 GB RAM and 16 GB of internal storage, a chunk of which is taken up by the Google TV OS and preinstalled apps. You are left with close to 10 GB for installing more apps. Sound output is rated at 60 Watts RMS with support for popular surround sound standards. That is a 20 Watts jump from what you get on the Thomson QLED TV. It has Chromecast built-in and lets you cast content to the TV from compatible apps on your phone or tablet.

The wireless remote control bundled with this TV operates over IR and Bluetooth. While the build quality and aesthetics are good, it has quite a few keys like the remotes of yore, most of which one may never use. The good part is most of the redundant keys are located at the bottom half of the remote and not spread across. More importantly, it doesn’t miss out on any of the important functions. You also get hotkeys for Netflix, Prime Video and YouTube.

Blaupunkt 50QD7010 QLED TV – User interface: 7/10
This Blaupunkt TV runs the latest Google TV OS based on Android 11 for TV. Most of the features are similar to Android TV 11 but with a slightly different user interface. The UI is quite polished with a higher weightage to content discovery. It shows suggested content from various OTT platforms which the AI believes would interest you. The suggestions improve over time. Their subscriptions need to be purchased separately though. Google Play Store is available here to access a lot more apps and games.

I don’t think there was much bloatware on this TV, which is good. There is a dedicated settings button on the remote that gives you access to pictures and other TV tweaks on the fly irrespective of the app or input in use. The UI is fairly simple and the learning curve isn’t steep. Despite this TV having the same processing hardware and RAM as the Thomson, the UI feels noticeably sluggish here. Every time you press a button, it takes a couple of seconds to respond, which can get annoying after a while. I believe it’s a matter of lack of optimization rather than hardware. A software update should be able to fix this.

Blaupunkt 50QD7010 QLED TV – Picture quality: 7/10
The colour reproduction of this TV is quite lively. The red shades are boosted yet again but they are slightly better than what we saw on the Thomson QLED. The rest of the colours are fairly well-tuned. You need to play around with multiple picture settings to tone them down, which may be a bit too much for an average user to bother with. Alternatively, one can try changing the colour temperature or using different picture presets available here.

Another issue I noticed is a bit of erratic contrast in certain HDR10 content on Amazon Prime Video where details in dark areas of the scene were not clearly visible. There was a considerable amount of flickering in high-contrast scenes too. However, no such issues were observed in SDR or Dolby Vision content or even in HDR10 content outside Prime Video. Be it HDR or SDR content in 4K or 1080p, everything looked sharp and lively on this TV, and the overall picture quality is quite pleasant.

The panel is fairly bright and the black levels are decent. The skin tones look quite natural as well. Dolby Vision content on Netflix is enjoyable on this TV, and the same goes for good quality 1080p or 4K content on YouTube. The TV upscales lower-resolution content quite well. Certain 1080p videos look almost as good as their 4K counterparts, and 720p videos are perfectly watchable too. Anything in lower resolution understandably looks dull. The viewing angles are quite good with only a marginal colour shift from sharp angles.

The picture presets have Dolby Vision or HDR prefixes when viewing the content in the corresponding formats. You get half a dozen presets of which Standard is most usable across the board along with Dolby Vision Bright. You can also create your own user preset which I would encourage you to do. You get quite a few options to tweak the picture here. Other than the usual brightness, contrast, saturation, and sharpness options, you also get adjustments for gamma, white balance and more. Do give them a go.

Blaupunkt 50QD7010 QLED TV – Audio quality: 7.5/10
This is one area where this TV is noticeably better than its Thomson counterpart. Two pairs of speakers rated at 60 Watts RMS total deliver a sharp audio output. They are compliant with Dolby Atmos, Dolby Digital and DTS TruSurround standards. The output is distinctly loud even at 25 per cent volume level. It is tuned for better vocal clarity, and the default tuning is a little low on bass. You do get sliders for Bass and Treble in the audio settings of the TV, but they are disabled while Dolby Atmos is enabled.

You do get a few sounds presets, but for best results, simply turn off Dolby Atmos as it doesn’t really do wonders on most TV speakers anyway. After that, bump up the bass all the way up to 75 per cent or beyond and enjoy a more balanced audio output with a good amount of warmth. The default sound is better suited for dialogue-heavy content like news or sports, but with the boosted bass, it is fun in music and movies too. If you seek better sound quality, you can always connect a soundbar or a speaker system with Bluetooth, optical or HDMI input.

Blaupunkt 50QD7010 QLED TV – Overall performance: 7/10
The TV takes about 45 to 50 seconds to boot up when you switch it on from the mains, which is on the slower side. Post that, the TV comes back on in just a couple of seconds from standby mode. Media playback through USB is perfectly fine through the default media player, and there’s always an option to install a different player from the Google Play Store. Things were generally quite stable with no app crashes, however, the TV does act a little funny when put on standby for a couple of hours.

Though the TV comes back on in a couple of seconds from standby mode, some elements continue to snooze a little longer. For instance the voice assistant. The voice assistant is generally prompt to respond when you keep the button pressed on the remote, but after you wake the TV from standby mode, the assistant takes a couple more minutes to wake up. The far-field mics are either overly sensitive or simply don’t respond. Let me elaborate.

There was a funny instance when the far-field mics picked up something from content playing on the TV that sounded like ‘OK Google’ and started searching for whatever came after that. It didn’t work when I tried playing that part again though. Often those mics respond well to your voice commands but you need to be louder than usual when seated a couple of metres away. Four white LEDs confirm that you are being heard.

When you switch on the TV from a long standby, the mics just stop working and you need to restart the TV. Another issue for the next software update to address. If you have privacy concerns about the mics being always on, there is a physical switch underneath the chin to turn them off. But doing that turns on four yellow LEDs that cannot be switched off; something similar to the OnePlus U1S TV.

Blaupunkt 50QD7010 QLED TV – Price and verdict
The Blaupunkt 50QD7010 QLED TV is priced at Rs 35,999 with a one-year warranty, which is not a bad price for what it offers. While the fancy features like far-field mics often misfire, the TV does get the basics right with a lively picture, enjoyable sound, Google TV OS and decent connectivity options. It misses out on the newer HDMI 2.1 ports which I would have happily traded for the hands-free voice commands feature, but the HDR format support is good.

All in all, this Blaupunkt QLED TV is a decent option for its selling price. And if the company chooses to fix its minor shortcomings through a software update, it can be a very good option. However, if you do not care for far-field mics and can live with slightly less powerful audio output, you may want to consider the 50-inch variant of the Thomson QLED TV (Q50H1000) that sells for Rs 2,000 less than this Blaupunkt TV. The rest of the features are pretty much the same for both.