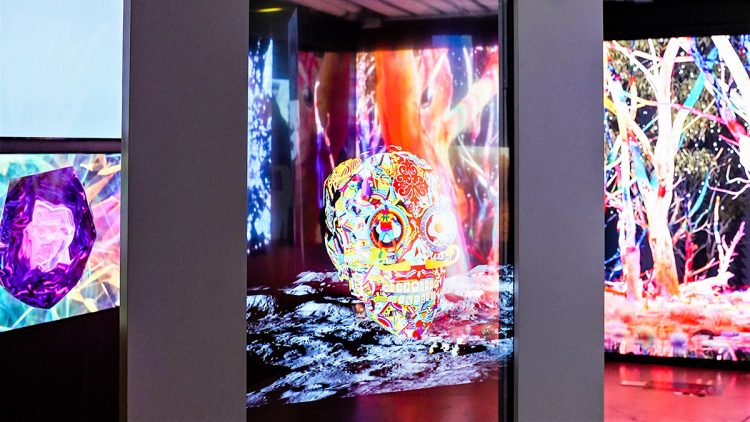 The NFT market exploded onto the crypto scene in 2021 with US$18.5 billion in total sales that year, with pixelated art such as Bored Ape Yacht Club and CryptoPunks dominating the market at what were at times astronomical prices for the blockchain-based creations.

Hong Kong’s Xperience Digital Art Fair, which opened on Oct. 20 and runs through Nov. 6 at Asia Standard Tower, aims to show there is more to NFTs than just files and pixels. The fair displays NFTs that utilize virtual reality and artificial intelligence, as well as tokens that stream real-time data from the physical world into the digital one.

Artist Victor Wong by display of Stand by You

“The most important thing about art is to connect to the audience, I think, how can I express my mind and synchronize with them?” said Wong. “We can use technology to make artwork that has lots of depth, and that can be ever-changing.”

Another animated artwork by Spanish artist Daniel Canogar is programmed to display and reinterpret financial information in real-time from major stock indexes, such as the Dow Jones Industrial Average and Nasdaq, as well as data from cryptocurrency and foreign exchange markets.

One of the show’s centerpieces, artist “Jacky Tsai’s 10 years” is an immersive art room to be sold as an NFT. It uses a projection to display kinetic art by London-based Chinese artist Jacky Tsai, who was named the exhibition’s Digital Artist of the Year.

Tsai also used real-time data in his NFT, Athena, and Buddha, which appears as a 3D hologram at the fair. The holographic image switches between representations of the Greek goddess Athena and the Buddhist goddess Guanyin depending on the real-time exchange rate of the Hong Kong dollar against the euro.

Other featured artists include veterans like Damien Hirst, who recently set fire to 1,000 artworks he had also minted as digital art NFTs, and Beeple, who sold his first NFT, The First 5000 Days, for US$69 million in 2021.

While 2021 was a record year for NFT sales, Digital Art Fair founder and global fair director Gillian Howard said she was hard-pressed to find ten well-renowned artists working on Web3 projects for that year’s event. Now, they have 30 galleries, with 70 artists as part of exhibits, after receiving 200 applications from galleries, NFT project teams and artists, she said.

“Not only do we have more traditional artists moving into NFTs, we also have galleries and new projects supporting and developing artists who want to make their start in the space,” said Howard.

NFT sales fell for the fifth straight month in September to their lowest level since July 2021, according to NFT aggregation site CryptoSlam. However, Howard hopes the marriage between contemporary art and NFTs will transcend the broader market.

“A non-fungible token is just a certificate, a way to show that you own something, but the digital art itself should be so much more than that,” she said. “At the digital fair, we want to show and educate people that when you buy an NFT, there should be ways to display it and enjoy it, and that the quality of the art actually matters.”

Furthermore, the use of Web3 technologies in fine art can help to innovate a market that has remained overly traditional, Howard added. “Opposed to a 2D painting, digital art can give creators the ability to combine aspects like music, performance art and technology.”

Auctioneer Sotheby’s, which has its own NFT marketplace, is also hosting an Xperience Digital Art Auction online until October 27, with exclusive access to some of the works.

Other fine art auctioneers are jumping in, with Christie’s opening its first NFT marketplace at the end of September. Contemporary art galleries like de Sarthe, Opera and Unit London are all showing up in the space.

How to Reverse Engineer a Unity Game