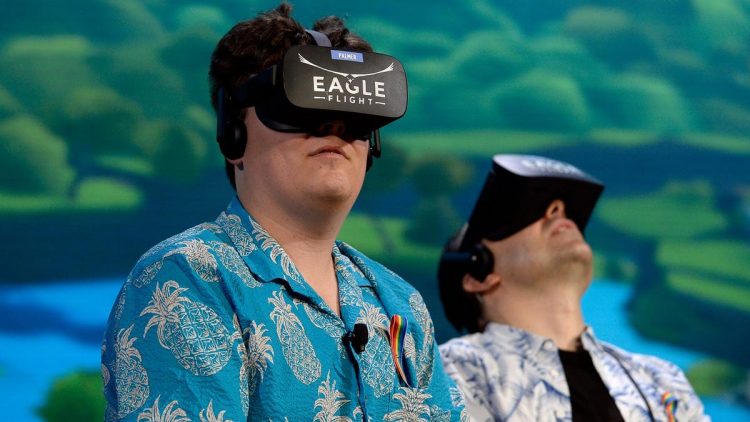 It’s an old trope in a lot of dumb sci-fi movies that involve virtual reality: you die in the game, you die in real life. In said movies, characters get trapped in a video game and must play for their lives. If their avatar perishes, so do they.

Well, it appears that someone has actually willed this trope into reality. That is, someone created a VR headset that literally kills you if you lose a video game. Fun, right?

The creator is not just any ol’ someone, but Palmer Luckey, the 30-year-old virtual reality wunderkind, defense contractor, Trump-funder, and co-founder of Oculus, the VR firm Facebook bought in 2014 for a cool $3 billion.

Luckey dropped a blog post on Sunday, explaining his weird new headset—which he claims is mostly a “piece of office art” for now—and included a picture of it as well.

Yes, this thing will actually end your life. More specifically, it is rigged with bombs so that your head will explode.

In his blog post, Luckey explains how his lethal new contraption is supposed to work:

I used three of the explosive charge modules I usually use for a different project, tying them to a narrow-band photosensor that can detect when the screen flashes red at a specific frequency, making game-over integration on the part of the developer very easy. When an appropriate game-over screen is displayed, the charges fire, instantly destroying the brain of the user.

In other words, Luckey has basically brought to life the plot of the nerdy anime web comic from the mid-2000s, Sword Art Online. Indeed, Luckey says this comic was the major inspiration behind his project. In the comic, characters don a thing called “NerveGear,” which is an “incredible device that perfectly recreates reality using a direct neural interface that is also capable of killing the user.” They are then dropped into a matrix-like world by a mad scientist and forced to endure a “death game” where the stakes of the gameplay are pegged to their own mortality. To Luckey, this is an exciting idea:

The idea of tying your real life to your virtual avatar has always fascinated me – you instantly raise the stakes to the maximum level and force people to fundamentally rethink how they interact with the virtual world and the players inside it. Pumped up graphics might make a game look more real, but only the threat of serious consequences can make a game feel real to you and every other person in the game.

Righttttt…well, that’s certainly an interesting idea, though some might argue that the pleasure of gaming actually derives from being able to experience death-defying scenarios and not have your head explode. Some people might argue that.

Anyway, whether its a good idea or not, Luckey seems to have plans to make his fun new hat even more horrifying than it currently is by adding “anti-tamper” tech to it:

This isn’t a perfect system, of course. I have plans for an anti-tamper mechanism that, like the NerveGear, will make it impossible to remove or destroy the headset.

So the ultimate goal here is to create a murder-helmet that you literally can’t take off. Once it’s been clamped to your noggin the only two scenarios in which you’ll be able to remove it are A) the one where you win the game or B) the one where your decapitated corpse is dragged out of a pile of gore-strewn rubble by whatever unfortunate soul happens to stumble by. This is probably why Luckey hasn’t actually used the thing himself yet. He says:

… there are a huge variety of failures that could occur and kill the user at the wrong time. This is why I have not worked up the balls to actually use it myself, and also why I am convinced that, like in SAO, the final triggering should really be tied to a high-intelligence agent that can readily determine if conditions for termination are actually correct.

…At this point, it is just a piece of office art, a thought-provoking reminder of unexplored avenues in game design.

Some will doubtlessly find this an exciting idea while others (actually, let’s be honest, most people) will probably be dissuaded from participation after reading the phrase “kill the user at the wrong time.” I, unfortunately, fall in the latter camp, though a grim cocktail of curiosity and schadenfreude are definitely going to keep me monitoring this project’s progress for the foreseeable future.