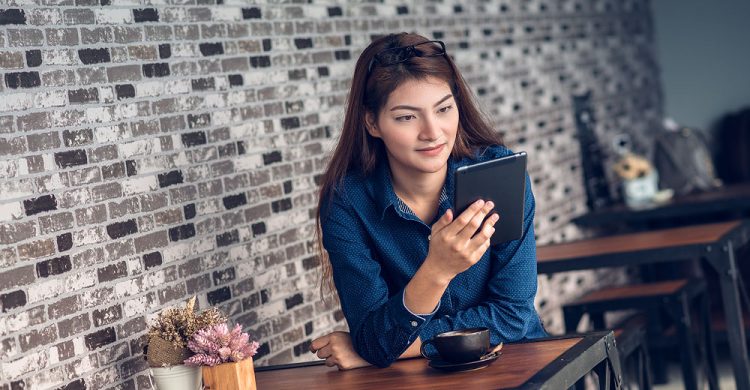 It has been 15 years since Amazon debuted the first Kindle, introducing many readers to the benefits of electronic paper (e-ink) technology, including long battery life and excellent sunlight readability.

Over the years the displays improved but still exhibited drawbacks such as screen ghosting, where a light version of the previous screen image can be seen in the light parts of the display, and disruptive refreshes, in which the screen flashes before showing an image to remove ghosting. The technology also traveled a fraught path to color.

Nova Air C hails from Onyx Boox, which offers the industry’s widest range of e-readers and e-paper tablets — even if one excludes its China-only products.

For example, Onyx Boox offers a keyboard folio for its 10.3″ devices that makes for the closest thing to a true E Ink laptop today (a product the company floated at a 2017 trade fair but canceled). It also offers a cover that adds page-turning buttons for e-reading apps. Indeed, one of the advantages of Android-based e-paper tablets is that they provide the screen aesthetic of a Kindle while allowing to choose from a wide range of digital bookstores.

While most companies in the e-paper tablet space have yet to ship a color product, the Nova Air C is Onyx Boox’s second entrant that includes improved color and grayscale uniformity.

Like other Onyx Boox products, the Nova Air C interface is marked by “function tabs” that appear to the left of the display by default. These launch the less-useful store filled with public domain works and a library to organize them, a basic file manager, and an exceptionally full-featured note-taking app.

Working with the product’s svelte, button-free stylus, the app supports multiple page sizes, adding and deleting pages and layers, inserting of images, shapes, and recordings, free cloud syncing up to 5 GB, and two methods of handwriting-to-text. You can also set up multiple pens and brushes and choose from three different erasing modes.

The Apps section includes an app store that offers some basics culled from the internet. However, the device supports the full breadth of Google Play and Android-style navigation including settings and notifications access from a swipe-down notification shade; Back, Home, and App Switch functions can be accessed by swiping up from the left, middle, and right side of the screen bottom respectively.

Optionally, a circle floating over other app interfaces — similar to those used by Android screen-recording applications — pops out controls for features such as switching apps, taking a screenshot, and powering off.

All told, the Nova Air C is a mix of the best that E Ink has to offer: a superlative note-taking app for those looking for an alternative to Android apps such as Nebo or Noteshelf, and access to a wide range of Google apps through Google Play — all in a lightweight, nicely accessorized package.

Onyx Boox is not the only vendor to bring color to previously monochrome slates using E Ink and similar technologies such as Digital Electronic Slurry (DES). The latter has been used so far in one-off crowdfunded products from Reinkstone and mini-laptop vendor Topjoy; both have faced long shipping delays from their original November 2021 targets.

While the more-established vendor Bigme has also gone the crowdfunding route for its Inknote Color device, it has used the same Kaleido Plus color technology used for the Nova Air C. Indeed, the product’s interface is very similar to that of Onyx Boox’s and other e-paper tablets, even including an optional floating navigational control and a lock screen illustration in the same style.

After launch, you’re presented with a similar shelf of icons on the left that includes meeting records, offline books, and storage. Bigme, however, offers more customization options, including being able to dock Android apps there. That’s particularly useful given that the company hasn’t (yet) implemented alphabetization for Android apps as Onyx Boox has.

Bigme partnered with Good e-Reader — a provider of news and reviews about e-paper devices and an online store selling many that are difficult to find in the U.S. — on the product’s design.

As Good e-Reader ‘s effusive review notes, the Inknote Color is the first color E Ink product with an A5-sized display. The larger size makes it better suited to content such as web pages, magazines, sheet music, and comics, as well as reading and annotating PDFs.

Similar to other large E Ink-based devices, such as Kobo’s Elipsa, the Inknote Color has a relatively thin bezel except for a particularly wide one on the left margin.

Beyond color, the tablet offers hardware features that have rarely, if ever, been seen before in such a product. These include:

The Inknote Color also revives the microSD slot that’s seen waning vendor support, and it supports 4G internet access, but not in the U.S.

A tech tour de force for the category, Bigme Inknote Color caters to those who want the largest color E Ink tablet available, particularly to consume and annotate content moved through a range of Android apps and recognized by the device’s image and audio text recognition applications.

E-paper tablets have made great progress in areas such as refresh rate and color support. However, their more mainstream competitors from companies such as Apple, Lenovo, and Samsung have made strides in e-paper sweet spots, like daylight readability and longer battery life, while continuing to have great advantages in color reproduction.

E-paper tablets, then, are better optimized for long periods of reading, note taking or annotation versus popular media-centric tablet activities such as playing games and watching videos. Products such as the Inknote Color and Nova Air C don’t come close to challenging the iPad for those tasks.

However, with Google Play support and an improving color story, these devices allow more forays into applications such as email, web browsing, and messaging — that is, if you want to dismiss their promise of a less-distracting experience.

Goal Zero was a pioneer in high-capacity portable power products with AC outlets sold under the Yeti brand. These were handy for applications ranging from camping to emergency power. However, its smaller products, sold under the Sherpa brand, did less to stand out in the USB-based charging crowd.

Since the first Sherpa products, we have seen a flood of no-name brands enter the portable power space. Additionally, USB-C, with its high-wattage power delivery option, has offered a more versatile and popular charging standard.

In response, Goal Zero’s latest 95 kWh Sherpa power banks, the 100PD, which delivers up to 100 watts through USB-C Power Delivery, and 100AC which offers the same in addition to a 100-watt AC outlet, do more to stand out while covering every base and offering exceptional control over their features.

While both products are large to accommodate their high capacity, the AC-based product is small for its class. Both include informative displays tracking charge levels, incoming and outgoing wattage, and other details.

More power banks are now smartly taking advantage of USB-C PD for charging themselves as well as other products, cutting down on the need for a separate AC adapter. The Sherpas implement this very well, with a switch on the back designating the port for input, output, or automatic detection; a subtle colored light ring around the port glows blue or green to reflect this.

The Sherpa 100 family products support Qi-based charging, and, in keeping with the company’s heritage, they are sturdily built — although not water-resistant; the 100AC includes a ventilation hole on its side. Still, the products represent how a company can reclaim premium positioning, even in a category that has seen extensive commoditization.