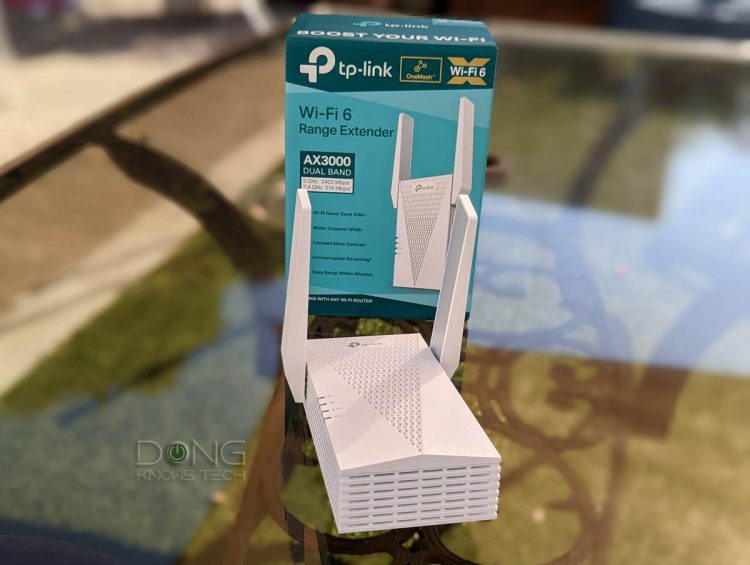 Generally, I’m not a fan of Wi-Fi extenders, and, on the one hand, the TP-Link RE715X AX3000 Mesh WiFi 6 Extender embodies everything I don’t like about this type of “quick fix” Wi-Fi broadcaster.

But on the other, it has a couple of things going for itself, namely the support for TP-Link’s OneMesh and a Gigabit LAN port to function as a standard access point.

So, how this piece of Wi-Fi 6 hardware pans out depends significantly on how you use it.

Here’s the bottom line: If you have a OneMesh-ready TP-Link router, which is the case with most Archer Wi-Fi 6/6E hardware, or have already wired your home and are looking for a relatively low-cost way to extend your Wi-Fi coverage, at the current street price of $120, the TP-Link RE715X makes a decent purchase for a home with sub-Gigabit needs.

Let’s digest that big if.

The TP-Link RE715X Wi-Fi 6 Range Extender seems compact enough, but it’s actually quite bulky, as you’ll find out why below.

TP-Link RE715X: The Wi-Fi 6 mesh add-on for the budget-minded

The TP-Link RE715X reminds me of the Asus RP-AX56. It’s a piece of hardware that plugs directly into a wall socket.

On the front, it has four status lights; on the wall-facing back, it’s a two-prong adapter; and on the sides, you’ll note two antennas that can swivel around. And the whole package is bulky. It’s a tad too wide, too thick, and too heavy.

You’ll notice all that when you plug it into a wall socket. First, it blocks all adjacent receptacles. Then, most importantly, it fits in loosely. The two prongs seem a tad short and don’t have enough grip to hold the extender’s weight, especially when you swivel the antennas out 90o or so. In that case, the extender leans outwards, risking falling off.

Here’s the TP-Link RE715X Wi-Fi 6 Range Extender in action. Note how it blocks the adjacent receptacles, and you should keep its antennas in the vertical position — else it might fall off the socket due to the change in the center of weight.

But if you have a single wall socket with tight receptacles, the extender might fit in with no problem, assuming you have no other device to plug — the RE715X has no pass-through socket.

In any case, this snap-on design, while convenient, can cause finding a good spot to place the RE715X to be tricky.

As an extender, it needs to be placed at a perfect distance from the primary Wi-Fi router. Too close, it’s not necessary and will even cause interference. Too far, the original Wi-Fi signals are too weak to be extended effectively.

And you have to be pretty lucky to find an available wall socket at the sweet spot. Let’s assume that you are.

Here are the right side and wall-facing side of the TP-Link RE715X. Note the Gigabit network port, the WPS button nearby, and the flimsy two-pongs that go into a wall socket.

You can use the RE715X as a standard extender (a.k.a repeater) or access point with an existing router. In either role, it’s pretty easy to set up.

As the default role of an extender, you can get the RE715X up and running within a few minutes thanks to the support for Wi-Fi Protected Setup.

All you have to do is plug the device into a wall socket at a reasonable distance from the existing Wi-Fi router, then hit the WPS on the router and RE715X. Within a minute or so, you’re all set.

By default, the extender will connect to the router’s 5GHz and 2.4GHz bands and extend them by adding an “_EXT” suffix to the original SSIDs, sharing the same Wi-Fi passwords.

You can leave them like that, or you can customize the name via the web user interface — you can’t change the password in the extender mode. Speaking of the web interface, that’s also how you handle the RE715X as an access point.

In this case, instead of using the WPS button, connect its network port to the existing router using a network cable. You’ll need to get to the web user interface to finish the rest.

There are two ways to get to this interface:

The rest is self-explanatory.

The RE715X’s interface is like that of other TP-Link extenders and allows for a good selection of customization. The most significant difference between the AP and Repeater modes is that the former lets you change the SSIDs and passwords of both bands, whereas, with the latter, you can’t change the passwords.

You can easily switch the TP-Link RE715X’s role between Access Point and Repeater via its web user interface.

But in both AP and Repeater mode, the Wi-Fi networks of the RE715X are not automatically synced with those of the primary router.

Consequently, if you change the SSID or Wi-Fi password on the router, you’ll need to run the setup process above again. That’s because the RE715X is not part of a system but works as an independent broadcaster.

And that brings us to the RE715X’s support for TP-Link OneMesh.

The RE715X is part of TP-Link’s OneMesh family. When you use it as an extender with a OneMesh-ready router, it’ll automatically become part of a Wi-Fi system.

Specifically, it replicates the router’s Wi-Fi setting in real time — you won’t need to set it up again if you make Wi-Fi changes on the router. On top of that, devices can roam between OneMesh broadcasters with ease.

And the setup process remains the same. All you have to do is connect the RE715X as an extender to a OneMesh router via the steps mentioned above, and your OneMesh system is ready. The two will automatically pair as part of a system.

It’s important to note that OneMesh only works in a wireless setup. Despite the fact the RE715X can work as a standard access point, OneMesh, for now, doesn’t support wired backhauling.

However, wired backhauling is now explicitly not supported with the latest hardware and firmware. On this front, in late September 2022, TP-Link confirmed that wiring was not an option in OneMesh “for now,” and the company might consider adding it “in the future.”

Common issues as an extender

As mentioned at the beginning, the RE715X has all the issues of a standard extender.

First, it’s the slow performance. The device connects to an existing network and then rebroadcasts the signal using the same band. Consequently, it lost 50% of the bandwidth on each end. So the performance is slow.

The second issue is that devices connected to the RE715X register to the router via a virtual MAC address instead of its native one. Consequently, MAC-related features — such as IP reservation, QoS, or Parental Controls — will not work with them.

You can swivel the TP-Link RE715X’s two antennas around.

I tested the TP-Link RE715X for over a week in all different roles, and it proved to be a reliable performer.

In terms of data rates, as expected, it worked best as an access point. As an extender (or OneMesh satellite,) its performance was noticeably reduced. But if you have a modest Internet connection, the extender will get the job done.

The TP-Link RE715X’s performance as an access point and an extender (repeater) — the latter also presents its speed when working as a OneMesh satellite.

The RE715X has a decent range. You can expect it to add some 1500 ft2 (46 m2) of Wi-Fi coverage. But your mileage will vary depending on the layout of the place.

Versatile and easy to use; can work as an extender, an access point, or a OneMesh satellite

No wired backhauling as a OneMesh satellite

The TP-Link RE715X AX3000 Mesh WiFi 6 Extender can be a good purchase for those already with a TP-Link OneMesh-ready router or a wired home.

In the former, they’ll get an easy and convenient mesh add-on satellite; in the latter, it’ll work well as a standard access point.

Unfortunately, the way OneMesh goes, there’s no option for using it as a mesh satellite with wired backhauling. And that’s a real bummer.

The RE715X will work as a standard repeater that extends the Wi-Fi coverage of any existing router. However, in this case, like all extenders, its performance will be sub-par and applicable onto to lose with modest Wi-Fi and broadband needs.

How to Find Your Router’s IP Address on Any Computer, Smartphone, or Tablet