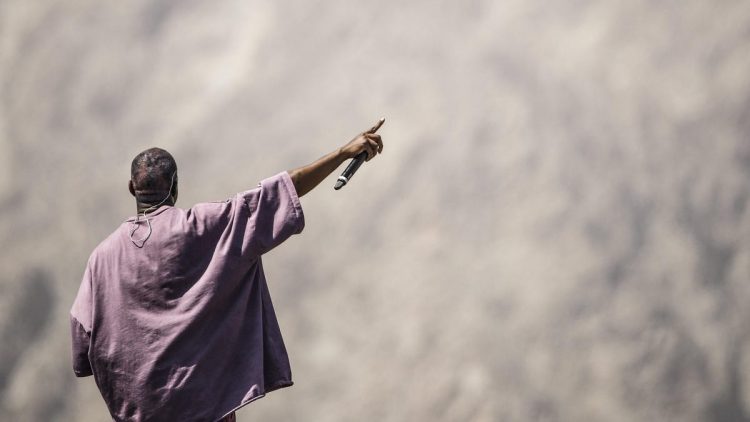 Instagram deleted an antisemitic post on Kanye West’s account and restricted his use of the app for violating its policies, according to its parent company, Meta. In response, West, whose legal name is “Ye,” stormed over to Twitter to shame Meta CEO Mark Zuckerberg for “kicking him off” Instagram.

On Friday, the American Jewish Committee called out an Instagram post from Ye in which he insinuated that the rapper Diddy, whose real name is Sean Combs, was being controlled by Jews. Ye’s post consisted of screenshots of his conversation with Diddy over the controversial “White Lives Matter” T-shirts he debuted at his Yeezy show at Paris Fashion Week. Diddy spoke out and criticized Ye’s T-shirts on Thursday and told people not to buy them or wear them.

In a video posted to Instagram, Diddy said that while he would always be there and support Ye as a free thinker, he didn’t like his friend’s White Lives Matter T-shirts.

One day later, on Friday, Ye began posting screenshots of his text messages with Diddy, who apparently wanted to meet up to chat about the issue in person. Ye didn’t take kindly to his suggestion and cursed him out. In response, Diddy said he just wanted to talk to Ye as a Black man because “this is hurting our people.” After being asked by Diddy for an address once more, Ye said Jewish people had told Diddy to call him.

“This ain’t a game. Ima use you as an example to show the Jewish people that told you to call me that no one can threaten or influence me,” Ye wrote. “I told you this was war. Now gone get you some business.”

As explained by the American Jewish Committee, Ye invoked the antisemitic trope of control in his post, which is dangerous and foments hatred against Jews. Ye needs to learn how to make a point without using antisemitism, it maintained.

“The control theme seeks to falsely portray Jews as secret puppet masters ruling over others,” the committee said on Twitter. “Ye needs to learn that words matter.”

Kushner is Jewish, and the committee stated that invoking the greed theme has led to “a long list of Jewish stereotypes, such as being money-oriented or controlling the world’s finances.”

On Saturday, although Meta confirmed that some of Ye’s content had been deleted, the spokesperson clarified that Ye had not been kicked off the platform, as he said on Twitter, adding that Instagram at times places restrictions on accounts that are frequent rule breakers. These restrictions include not allowing them to post, comment, or send DMs on Instagram.

The Meta spokesperson did not elaborate on what rules or policies Ye had broken.

Over on Twitter, Ye posted a photo of him with Zuckerberg and said the Meta CEO used to be his friend (using the n-word). Ye’s move to the blue bird app captivated users, who responded with sarcasm, laughter, and disbelief over his behavior. Some also celebrated Ye’s return to the platform, since the last time he was active was in late 2020.

One of those users was Twitter’s potential future owner, Elon Musk, who offered the artist a warm welcome back.

At this point, it’s not clear whether Ye will make Twitter his permanent social media home or go back to Instagram once his restrictions are lifted.