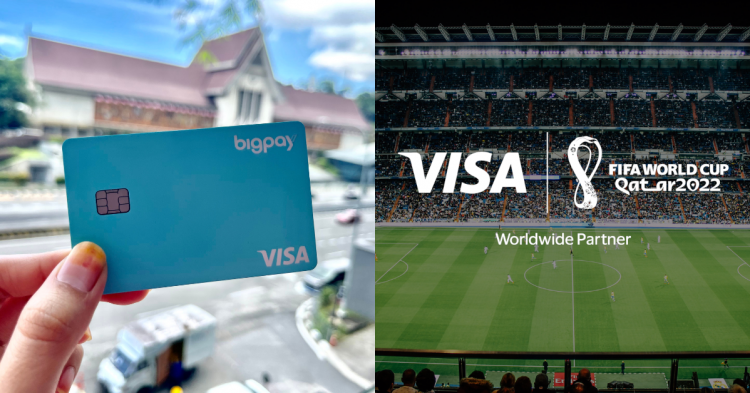 [This is a sponsored article with BigPay.]

The FIFA World Cup™ that’s happening this November is arguably one of the largest sporting events that’s held once every four years.

For three years, national teams will compete to qualify for the tournament phase in the fourth year, during which 32 qualifying countries will compete for the title of champion and the FIFA World Cup™ Trophy.

It’s a show that many, if not all, football fans would not miss out on, with lots often looking forward to seeing the tournament in person. At 2018’s FIFA World Cup™, there were slightly over 3.03 million visitors from around the globe.

This year, BigPay wants to give a total of eight lucky winners the opportunity to win an all-expenses-paid hospitality package for two to see the FIFA World Cup™ live in Qatar in November 2022, courtesy of Visa.

What is included in the hospitality package?

Here are the benefits the hospitality package comes with:

Do note that the prizes do not include meals, events, as well as activities outside the programme itinerary.

In addition, the hospitality package does not cover hotel amenities, travel documents, taxes, travel insurance, and transportation to and from the airport in Malaysia.

How do I take part in this lucky draw?

For those interested in participating in this lucky draw, BigPay will award one raffle entry for every RM50 you spend with your BigPay Visa Card.

The announcements for the winners of the lucky draw are as follows:

You’re not restricted to just one raffle entry though. If you spend a cumulative amount of RM1,000 before the next winner announcement, you will get a 2x multiplier which will be applied to your current number of raffle entries.

On the other hand, if you spend a total of RM3,000 before the next winner announcement, you will instead be given a 5x raffle entry multiplier, giving you a huge boost in your chances of winning the all-expenses-paid hospitality package.

Scenario 1: If you made a single RM50 transaction up until the time of the raffle draw, you will have a total of 1 raffle entry.

Scenario 2: If you made a total of RM999 worth of transactions, you will be awarded a total of 19 entries.

But what if I don’t have a BigPay Visa Card?

The BigPay app has a feature where you can sign up for a BigPay Visa Virtual Card, which functions much like BigPay’s physical debit card.

To briefly explain how similar it is, the virtual card comes equipped with its very own 16-digit card number, an expiration date, and a CVC (Card Verification Code) number.

The virtual card creation is instant, which means you can use it to make purchases online immediately.

On top of that, it comes with additional features allowing it to be used for transactions at any participating merchants worldwide, and it follows real-time exchange rates when making purchases abroad, courtesy of Visa.

There are a few safety features available too, like the ability to freeze the card straight from the app to prevent further unwanted transactions should you misplace your card.

When spending with BigPay, you can also earn airasia points which can be used to redeem various rewards found on the airasia Super App, such as discounts on rides, flight tickets, hotels, and more.

To commemorate the FIFA World Cup™, BigPay will be offering a limited edition Visa FIFA World Cup™ Themed Virtual BigPay Card, which will be available starting now until January 31, 2023.

Those signing up for BigPay for the first time using the promo code “PCWORLDCUP” will be eligible for RM22 in cashback credits.

– Participate by spending with your BigPay Visa Card (1 raffle for every RM50 spent).

– Boost your lucky draw chances with 2x and 5x multipliers when you hit the minimum spending criteria.

– Non-BigPay users who sign up using the promo code “PCWORLDCUP” will be eligible for RM22 in cashback credits.