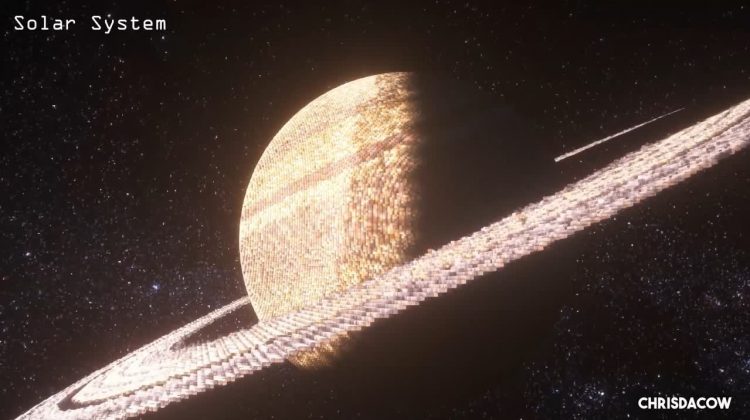 The big picture: Minecraft players have built everything from well-known architectural designs to functioning supercomputers. But Minecraft aficionado Christopher Slayton decided it was time to go bigger. And by bigger we mean he recreated the entire known universe using only Minecraft’s in-game resources.

Minecraft players have been creating enormous, complex creations for years, but Christopher Slayton’s latest project may have just earned him the crown as the new king of Minecraft builds. Slayton, also known on YouTube as ChrisDaCow, spent two months studying, recreating, and sharing the wonders of the cosmos using nothing but Minecraft materials and mods. The results are nothing short of stunning, especially given the medium and the amount of time spent building it.

Following his initial Reddit post to r/Minecraftbuilds, Slayton’s video has unsurprisingly received more than 3.2 million views and his subscriber count has risen to well over 225,000. The video, which is also well produced in its own right, follows the Minecraft enthusiast’s journey to not only build but also understand our planet, solar system, and everything that lies beyond.

The video begins with Slayton’s hands-on approach to gathering information, which involves him skydiving for inspiration on how to start building our own planet. Slayton told the New York Times that the journey from idea to a finished recreation of the universe made him “…realize even more how beautiful it is.”

One of Slayton’s many challenges along the way was finding a realistic method to recreate light’s behavior in space and then applying it to his newly constructed celestial bodies. Slayton used a number of Minecraft build mods, including World Edit, galaxy texture packs, Distant Horizons, Optifine, and other tools to create the desired look and lighting effects.

Slayton’s efforts are extraordinary considering the amount of research, calculation, design, and application required to construct each element of the model. At one point in the video, Slayton can be heard asking, “What am I doing with my life? I’ve been sitting in this tiny, sweaty room for eight hours trying to build the curve of a black hole.” His hard work has undoubtedly paid off given the viral reaction to his creation.

Slayton hopes to continue developing elaborate Minecraft creations. If his model of the universe is any sign of what he has planned for the future, then we also hope he continues. Fans and other Minecraft building enthusiasts can find more information and downloads of Slayton’s builds, including the universe, on his Patreon page.