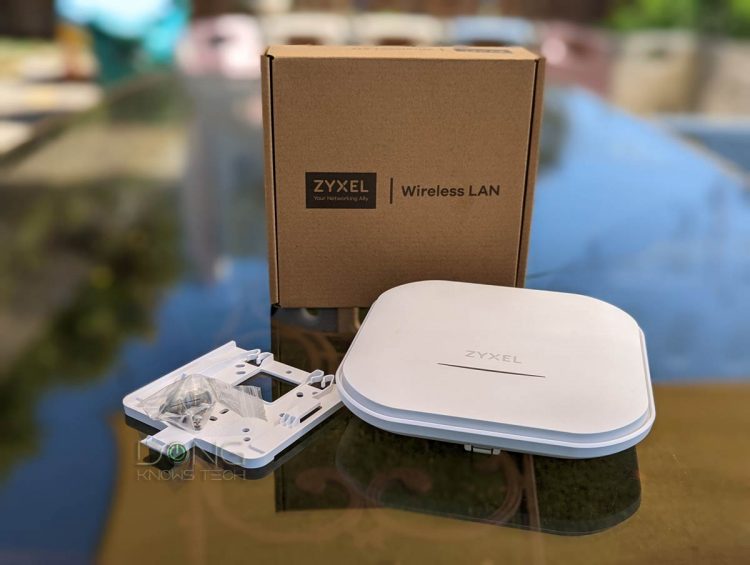 ZyXel NWA220AX-6E is one of a kind, not necessarily in a good way.

On the one hand, it’s an affordable well-performing PoE access point that can work as a standalone unit or part of ZyXel’s cloud-based Nebula mesh system — you’d need to register an account and log in with the vendor.

On the other, it’s a selectable broadcaster that makes things hard to select by offering you either the popular 5GHz band (Wi-Fi 6) or the novelty 6GHz (Wi-Fi 6E). You read it right; you can’t use both simultaneously. It’s madness.

For this reason, you should look at the Zyxel NWA220AX-6E as more of a Wi-Fi 6E upgrade device that adds 6GHz to an existing Wi-Fi 6 (or 5) network. And only in that case it makes sense.

In a way, and at the current street price of less than $230, the NWA220AX-6E is an excellent PoE-ready alternative to the ARRIS SURFboard W6U for those looking to upgrade to the new 6GHz band.

But if you expect it to be just another Wi-Fi 6E access point, like the Netgear WAX630E, you’ll be sorely frustrated. You might even get mad.

Of all the Wi-Fi 6E broadcasters (router and access points) I’ve worked with, the NWA220AX-6E is the only one that’s not fully backward compatible.

You have to use it either as a Dual-band Wi-Fi 6 router, just like in the case of the WAX630s, or a Wi-Fi 6E upgrade device. In the latter case, it won’t support 5GHz clients at all.

But other than the hardware oddities, the NWA220AX-6E shares the same firmware and, therefore, the settings and features as others in ZyXel’s Nebula family.

But the NWA220AX-6E can also work as a standalone access point with a local web user interface which is how I evaluate it in this review.

As a Nebula member, the NWA220AX-6E behaves the same as any others — more in the review of the WAX630s.

That said, let’s check out the new AP’s hardware specs.

Not ready out of the box, power-wise

Out of the box, the ZyXel NWA220AX-6E includes accessories for mounting but not powering. There’s no power adapter or PoE injector.

While that’s upsetting, this is the case for most PoE APs. The idea is that you can use it with an existing PoE switch. And you’ll need an 802.3at PoE (PoE+) or higher) switch.

If you don’t have a switch, you’ll need to get a separate power adapter or, better yet, a PoE injector. In this case, the best option is the POE12-30W injector which costs another $50.

The Zyxel POE12-30W injector that the ZyXel NWA220AX-6E doesn’t include. It’s one of a few on the market that can handle 2.5Gbps speed.

Once you’ve gotten the powering part, the hardware setup portion of the ZyXel NWA220AX-6E is simple and the same as any PoE device via these two common steps:

Standard in setup and management

Like the case of all standard Wi-Fi access points, to set up the NWA220AX-6E, you first need to get to its local user interface via its IP address.

Since the existing router gives out this IP, it can be tricky to figure it out, though not exactly hard, as I mentioned in this primer post on IP addresses.

Once you have the IP address, put it on a local computer’s browser, and you’ll get to the access point’s interface. The ZyXel NWA220AX-6E’s default login is admin for the username and 1234 for the password, which you will need to change before continuing.

The ZyXel NWA220AX-6E has a comprehensive local web user interface with many Wi-Fi settings. Note how you have to define these settings in groups called “Objects” and “Profiles”.

Like the case of the WAX630S, the ZyXel NWA220AX-6E manages its Wi-Fi settings in a more enterprise class which might require some getting used to for those familiar with home networking devices.

For example, it defines a set of Wi-Fi settings (SSID, security, authentication, etc.) by putting them into objects and profiles. After that, you can apply them to different individual Wi-Fi networks.

But the gist is that you can set up to eight individual SSIDs for the 2.4GHz band and another eight or either the 5GHz or the 6GHz — you can’t use these two bands simultaneously. In most cases, a single SSID for each band is enough.

The ZyXel NWA220AX-6E includes mounting accessories out of the box.

The ZyXel NWA220AX-6E is relatively compact.

It’s much more compact than the Netgear WAX630E, one of the market’s first Wi-Fi 6E access points.

The ZyXel NWA220AX-6E has two network ports. One is a 2.5Gbps PoE+ Uplink port, and the other is a Gigabit LAN port.

The underside of the ZyXel NWA220AX-6E. The AP is an indoor device.

I tested a single unit of the ZyXel NWA220AX-6E for over a week in multiple configurations. All of its bands passed my 3-day stress test with no disconnection and delivered good throughput, though not as good as one might expect from a Multi-Gig-ready broadcaster.

Specifically, the 5GHz and 6GHz of the AP sustained below Gigabit or just half of Gig+. But if you have a Gigabit broadband, the ZyXel NWA220AX-6E will work out well.

Gig+, or Gig plus, conveys a speed grade faster than 1Gbps but slower than 2Gbps. So, it’s 1.5Gbps, give or take, and it’s not fast enough to be qualified as Multi-Gig.

Gig+ generally applies to the sustained speeds of Wi-Fi 6 or 6E (via a 2×2 connection) or Internet speed, not wired local connections.

The chart below shows how the new AP performed compared to other Wi-Fi 6E mesh satellite units.

In terms of coverage, the ZyXel NWA220AX-6E shared the same range as the WAX630s on the 5GHz and 2.4GHz bands, in my experience.

On the 6GHz, its range was the same as any other Wi-Fi 6E router or access point I’ve tested. If there’s a line of sight, you can be as far as some 75 feet from it and still get a good signal. However, behind a wall, you’ll need to cut the range significantly. That’s just the nature of this band.

Only 6GHz or 5GHz is available at a time; no power adapter or PoE injector is included.

Sustained Wi-Fi throughputs could use some improvement

Overwhelming amount of settings for home users; a Nebula login account is required for mesh function and remote management

The ZyXel NWA220AX-6E is either a 6GHz band upgrade for an existing network or a Dual-band Wi-Fi 6 access point. Either way, it’ll deliver reliable Wi-Fi performance for a relatively large home worthy of its current $225 price tag.

If you treat it as a typical Wi-Fi 6E broadcaster — which generally gives you 2.4GHz, 5GHz, and 6GHz simultaneously — you’ll be disappointed.

If you’re into Gigabit-class performance or Multi-Gig, also check out these alternatives.

How to Sign Out of Google on All Your Devices