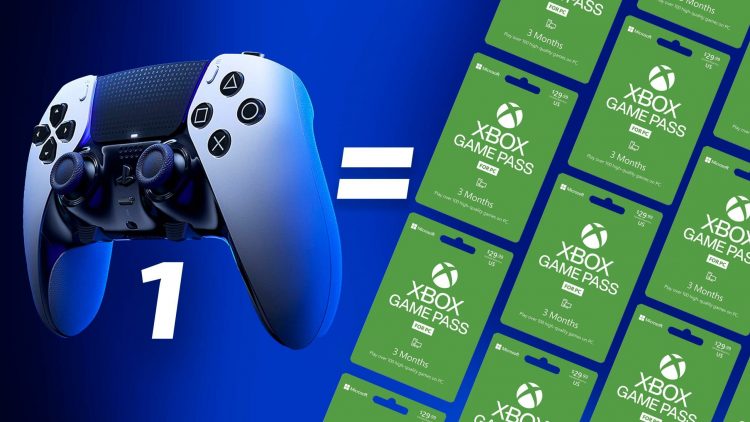 Earlier this week, PlayStation confirmed that its DualSense Edge controller for the PS5 will cost a staggering $269.99.

While the price of pretty much everything is going up, it’s interesting to see PlayStation charging so much for a controller. Naturally, many people quickly pointed out how the DualSense Edge is more than half the price of the $519.99 PS5 Digital Edition. For context, the Xbox Elite Wireless Controller Series 2 costs $229.99, while the standard PS5 DualSense is priced at $89.99.

Of course, the DualSense Edge is intended to be a niche product. After all, it’s a high-end customizable gamepad that people generally will only use if they play multiplayer games often. PlayStation clearly isn’t targeting everyone with this.

Even still, close to $300 for a controller is insane, and as such, we feel the need to call that out. With that in mind, here are 10 gaming products you could put that money towards instead. Now, we’re not saying you should buy any of these, but rather, merely offering up some alternatives — some serious, some maybe not so much — to an overpriced gamepad.

I’m not much of a mobile gamer myself, but it’s obviously a very big market. In particular, there’s been a lot of positive reception to the Backbone One, a controller that makes it easier to play on mobile. There’s even a specific PlayStation version with dedicated buttons and functionalities for the ecosystem. If the idea of being able to stream your PS5 games to your phone is appealing to you, the Backbone One PlayStation Edition will only set you back $139.99, leaving you with $130.

Xbox Game Pass Ultimate is the best deal in gaming, offering access to hundreds of games across console and PC. Through its Cloud Gaming feature, you can also stream titles to mobile devices, which is a great option for people who don’t want to buy hardware.

Considering Xbox Game Pass Ultimate is $16.99/month, $270 would last for 15 months. This is also assuming you’ve used the service before and aren’t eligible for the $1 introductory offer for your first month.

With $270, you could buy Nintendo’s most affordable Switch system and still have $10 remaining. While the Switch Lite doesn’t have TV docking capabilities, it otherwise does everything a regular Switch can do, including having access to the Switch’s top-notch games catalogue. And if you really did want a standard Switch, you’d “only” need an additional $140. The OLED Switch model, meanwhile, is $449.99.

Cyberpunk 2077 has seen a huge bump in popularity lately due to the Edgerunners anime series. Image credit: CD Projekt Red

If you’re not one of the many people who watched Studio Trigger’s exceptional Cyberpunk: Edgerunners on Netflix and then got into Cyberpunk 2077, you could buy nearly seven full copies of the open-world action-RPG for you and your friends. Of course, you can’t have 0.75 of a game, so let’s knock this down to six copies for $239.94. With that remaining $30, you could scoop up the highest Netflix subscription ($20.99/month) to watch Edgerunners and pass your account around with the boys before Netflix starts charging for password sharing.

While I’m fairly mixed on PlayStation Plus Premium, it’s the closest thing PlayStation has to Xbox Game Pass with its catalogue of older games and streaming functionality. In Canada, one year of Premium is $139.99, so for the price of a DualSense Edge + $10 extra, you can get a full 24 months of the highest PlayStation Plus offering. If you go with PS Plus Extra, which is what I’d recommend, you can get two full years for $229.99 ($114.99/12 months) and have $40 left for something else, like a game.

The DualSense Edge is basically 2/3 the cost of Microsoft’s entry-level current-gen console. While it’s less powerful than the $599 Series X and lacks a disc drive, it plays all of the same games and offers the same speedy SSD. It would be a great way for current PlayStation owners with a bit of extra cash to get into the Xbox Game Pass ecosystem if they don’t want to stream.

Get the Xbox Series S here.

A boatload of batteries — price varies

We always need batteries for something or another, whether it’s (annoyingly) Xbox’s Wireless Controller, your TV remote or a fire alarm. Given that, you might want to spend your hard-earned $270 on a big supply of batteries.

For the purposes of this story, we’ve chosen Energizer’s AA batteries, but this would, of course, change a bit if you went with AAA, C, etc. With respect to the rabbit-themed AA, though, you could get 16 packs of 20-pack ($16.14 individually on Amazon) for $258.24, leaving you with $11 and change.

The file sizes for games are so big nowadays that they just eat right through your storage. Forget playing a game with a high-end controller — does your PS5 even have the space to play any more games, period? Once you know which M.2 SSDs are supported on your console, then the price will be determined by the size and brand you want. That said, you can get 1TB drives for around $200, which is certainly pricey in and of itself, but still more affordable than a DualSense Edge.

There have been so many big game releases in 2022. The year started strong with the likes of Pokémon Arceus: Legends, Horizon Forbidden West, Elden Ring and Kirby and the Forgotten Land, while the following months include Xenoblade Chronicles 3, Return to Monkey Island, Multiversus, Mario + Rabbids: Sparks of Hope, Splatoon 3, A Plague Tale: Reqiuem, Live A Live, Gotham Knights and, in the next couple of months, Call of Duty: Modern Warfare II and Warzone 2.0, God of War Ragnarök, Sonic Frontiers and Crisis Core Reunion: Final Fantasy VII.

That’s to say nothing of lower-profile games like Immortality, The Chant and Pentiment. Many of these are on PlayStation, too, so PS5 owners could buy multiple of them (at least three if we’re starting at full-priced $80-90 titles) instead of a premium controller.

Valve’s remarkably impressive PC handheld is the perfect gateway into gaming PCs for those who haven’t invested a lot of time and money into building one. Instead of a DualSense Edge, you could put the $269.99 towards the base Steam Deck model and only need $230 more. That said, you’ll likely want the middle Steam Deck offering, the $659 256GB NVMe SSD model. While it might seem expensive, it’s a decent price for the hardware and certainly worth the investment.

Again, though, it’s ultimately your choice on what to spend your hard-earned cash. Those who are interested in the DualSense Edge can pre-order it now in Canada.

MobileSyrup utilizes affiliate partnerships. These partnerships do not influence our editorial content, though we may earn a commission on purchases made via these links that helps fund the journalism provided free on our website.

What to Look for in a Gaming Monitor – Review Geek