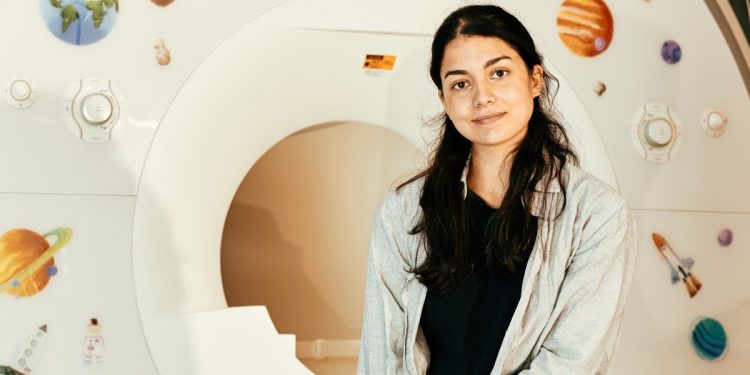 Saima Malik-Moraleda, a fifth-year PhD student in the Harvard/MIT Program in Speech and Hearing Bioscience and Technology, is trying to help answer this question. In the process, she hopes to uncover ways to ease some of the cultural and political tensions that surround bilingualism, especially in cultures where certain languages carry distinct political connotations. As a member of the McGovern Institute lab of Ev Fedorenko, PhD ’07, who researches how brains create language, Malik-Moraleda is studying bilingual brains in a new way.

Neurobiologists typically focus on the relative involvement of different brain regions in bilingual activity. Malik-Moraleda is taking that one step further by studying neural networks—the specific pathways by which information travels in the brain. Instead of simply observing which brain regions light up during a particular activity, she uses what’s known as a localized approach, tracking the reactions of specific sets of neurons within—or sometimes between—those regions.

Malik-Moraleda herself speaks Spanish, Kashmiri, Catalán, English, Urdu, Hindi, and French, and she is learning Arabic. She has always been cognizant of the cultural questions that bilingualism presents. Her mother is from Spain and her father is from Kashmir, a disputed region of South Asia that is claimed by both India and Pakistan. Growing up, she would spend the school year in Girona, a city in Spain’s Catalonia region, and travel with her father to Kashmir during summer breaks.

Splitting her year between the two places revealed to Malik-Moraleda how differently they treated bilingualism. Both regions are culturally different from surrounding areas and have historically fought for independence, so residents often speak a region-specific language as well as the primary language of the surrounding country (or countries). On street signs in Barcelona, for instance, “you’re going to see Catalán first, then Spanish, and then English,” Malik-Moraleda says. But while Catalonians prefer Catalán and tend to speak Spanish only when necessary, in Kashmir, she says, parents generally discourage their children from even learning Kashmiri. Instead, they urge them to speak the more commonly used languages of Urdu or English to better prepare them for schooling and a career.

As a polyglot child, watching her relatives neglect Kashmiri bothered Malik-Moraleda. More than sadness or anger, she felt confusion—why, when given the chance, would someone not seize the opportunity to speak two languages? “It always blew my mind,” she says. She decided to pursue a career uncovering how bilingual brains actually work so she could show her community that bilingualism might have some valuable advantages too.

Better developer platforms are the key to better digital products

The best new streaming movies this week: Here’s what to watch