This Week in Space: Insight News, the ISS Dodges Debris, and NASA Picks Its UFO Team 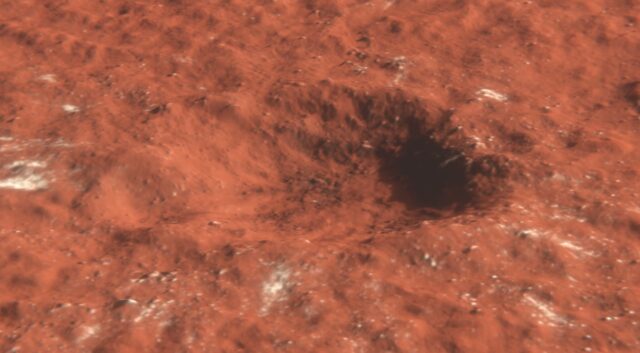 Welcome back, space fans, first-time readers, and all folks in between. The first few days of the week were a bit quiet, space-ifically speaking, but there were some late-breaking items of interest, especially for fans of InSight and Mars exploration in general.

Since landing on Mars NASA’s InSight probe has detected the first seismic event on another planet, improved our understanding of Mars’ crust, mantle, and core, measured the remnants of Mars’ magnetic field, and collected more data on Martian weather than any other probe sent to Mars thus far. The mission is set to end at the end of December 2022, but an announcement NASA made on Thursday once again proved the value of InSight’s mission.

On December 24, 2021, InSight detected a magnitude 4 marsquake. After analyzing the seismic data and combining InSight’s measurements with data gathered from the Mars Reconnaissance Orbiter (MRO), NASA has determined that this specific marsquake was actually caused by a meteor impact. While the impactor was modest (16 – 39 feet), it’s still one of the largest crater formation events NASA has ever witnessed in real time. NASA has published before-and-after photos of the impact site:

“This meteoroid impact crater on Mars was discovered using the black-and-white Context Camera aboard NASA’s Mars Reconnaissance Orbiter. The Context Camera took these before-and-after images of the impact, which occurred on Dec. 24, 2021, in a region of Mars called Amazonis Planitia.” Credits: NASA/JPL-Caltech/MSSS

“It’s unprecedented to find a fresh impact of this size,” said Ingrid Daubar of Brown University, who leads InSight’s Impact Science Working Group. “It’s an exciting moment in geologic history, and we got to witness it.”

Researchers are hoping to use this data and information collected from several other relatively energetic marsquakes to better understand the deep structures of the Martian crust. The northern and southern hemispheres of Mars are dramatically different. This has driven speculation as to the deep composition of the planet underneath each hemisphere. The information we gathered from InSight, once fully analyzed, could help us understand how different materials are distributed in the Martian crust.

InSight’s mission may be all but over, but there are plans to use some of its spare hardware in a similar mission to the moon in the near future. InSight’s seismometer is named SEIS (Seismic Experiment for Internal Structure). When the French space agency CNES and the Institut de Physique du Globe de Paris (IPGP) built SEIS, they also built a spare model of the hardware that remained on Earth. After InSight’s success, this spare hardware has been modified for a mission to the far side of Earth’s moon.

There’s definitely a Nazi base on the dark side of the moon. I saw it in a movie, so it must be true…

The SEIS Very Broad Band (VBB) seismometer will be one component of the Farside Seismic Suite and should be ready for lunar deployment by 2025 via NASA’s Commercial Lunar Payload Service program. It’s been decades since NASA had functional seismometers on the Moon; the Apollo network for monitoring seismic activity shut down in the late 1970s and we’ve never had seismometers on the far side of the moon at all. If Nazis really are secretly tunneling through the dark side of the moon in pursuit of our precious bodily fluids, projects like this one will make sure we know about it.

The Great Impact Hypothesis is currently the leading explanation for how the moon formed by a wide margin, but there are still substantial questions about the event. A better understanding of the moon’s composition, structure, and geological activity could help us answer questions about where it came from in the first place.

Earlier this week, the International Space Station was once again forced to maneuver to avoid being struck by space debris created by Russia’s anti-satellite weapons test in November 2021.

The Russian military’s performance in Ukraine over the past year offers a partial explanation for why Russia chose to destroy Cosmos 1408 with a missile, but the laws of physics are not particularly concerned with human concepts like nationalism. Orbital space junk is a danger to the long-term usefulness of space and to humanity’s common ability to explore the cosmos. Kessler Syndrome might not prevent us from using satellites in varying orbits, but it makes absolutely nothing better.

The debris distribution around earth as of 2019. Data from NASA simulation.

Since Russia’s test last year, the United States has committed to banning such testing within our borders and has called on other nations to make similar pledges. Thus far, Canada, Germany, Japan, New Zealand, South Korea, and the UK have all pledged not to perform anti-satellite weapons tests of their own.

NASA has announced the 16 individuals who will participate in its independent study to understand and characterize sightings of what it calls Unidentified Aerial Phenomena, or UAP. The organization defines a UAP as “Observations of events in the sky that cannot be identified as aircraft or as known natural phenomena.”

Official discussion of UAPs and UFOs has been up sharply this year, as my colleague Adrianna Nine noted earlier this week, writing:

“The team is impressively diverse: Two astrophysicists, two policy specialists, two aviation specialists, an oceanographer, an AI startup founder, a science journalist, a planetary scientist, a former NASA astronaut, a telescope scientist, a space infrastructure consultant, an electrical and computer engineer, and a physicist each made the cut.”

NASA has posted a brief bio of each team member, and it gives the impression of a serious-minded bunch.

The US government may not devote a great deal of time to chasing reports of little green men, but there are UAP reports that remain unexplained to this day and some of them are backed up by active radar returns that confirm there was something beyond a merely visual phenomenon. There are obvious national security reasons why Uncle Sam would like to move these events into the “known knowns” category.

This week, we’re on location in the Adirondack Mountains of New York. Between the mountain tops and the dark night skies, the Adirondacks are one of the best places in the United States for skywatching. Orion might just be my favorite constellation, and it’s low in the sky as night falls. Brilliant Betelgeuse shines crimson from the mighty Hunter’s shoulder. Thursday evening, it was cold and quite clear, and we caught a few meteors — probably from the Orionids.

The Orionid meteor shower actually comes from the debris trail of Halley’s Comet. As the Earth sweeps out its spiraling trail through space, it passes through the comet’s path, and some of the debris gets caught in our atmosphere. But the meteor shower gets its name from the place in the sky from which it appears to originate. The Orionids appear to radiate from a point near the constellation Orion.

Cold, clear weather is great for skywatching. And while the Orionids technically peaked last week, they’ll be going strong all through November. This shower often creates long, streaking fireballs. So, while you’re outside looking at the constellations and the ‘backbone of night,’ you might just get lucky and see a shooting star.

All through this summer and fall, Mars, Jupiter, and Saturn have kept up their own colorful show. It’s said that planets don’t twinkle like stars, because planets are so much closer that the atmosphere doesn’t distort their light quite as badly. And this week, if you have clear skies, you might take a moment after sunset to look for the jewel-like colors of these three planets. (They’re especially striking at altitude because you can literally get above the clouds.) It’s a great demonstration of the planets’ steady light.

But more than a physics demonstration, it’s just plain cool. Think of it: you’re looking at a whole ‘nother planet. They’re so far away! But you can still see them. Here we are looking out, through space, into the outer Solar System, and you can see entire other worlds with your naked eye. It’s just a marvelous thing. So get outside and look up!