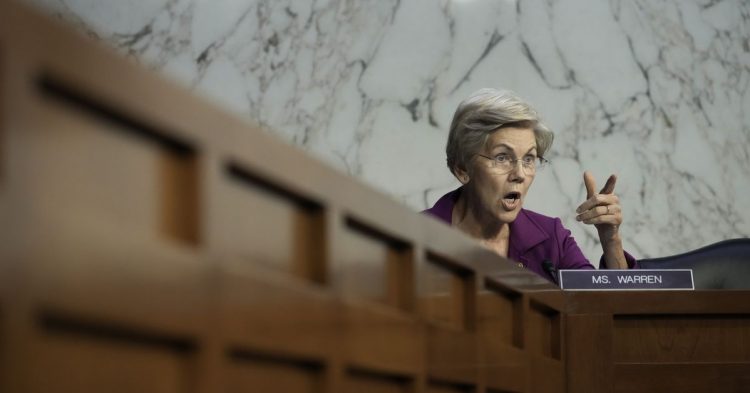 Elizabeth Warren has a new Big Tech target: its growing presence in our cars.

The Democratic senator from Massachusetts recently sent a six-page letter to the country’s top antitrust enforcers — Lina Khan, chair of the Federal Trade Commission, and Jonathan Kanter, who heads up the antitrust division of the Justice Department — asking them to look at Google, Amazon, and Apple’s expansion into the automotive industry. She hopes taking action now will prevent them from taking over our cars in the way they already have our computers, phones, and homes.

Big Tech is well on its way to taking over our dashboards as well, turning them into giant versions of smartphones and Echos. This would give them yet another rich source of data to use and another industry to control, and make it that much harder for other companies to compete with them.

Discover how the digital world is changing — and changing us — with Recode’s weekly newsletter.

“I’ve been ringing the alarm about Big Tech’s growing dominance across our economy, and their expansion into the automotive industry is the latest effort to stomp out competition in yet another sector,” Warren told Recode. “This has potential consequences for American workers, developers, and consumers — and could lead to less innovation and higher prices.”

This is Warren’s first letter to the FTC and DOJ about this matter, but she’s not the only person who is worried here. Last April, 11 Democratic members of the House wrote a similar letter to Khan and Kanter, and several antitrust and consumer rights groups sent a letter last January to Khan, Kanter, and Sen. Amy Klobuchar (D-MN) and Rep. David Cicilline (D-RI), who head up the Senate and House antitrust subcommittees, respectively.

In the letter, Warren writes that Big Tech wants to be a “one-stop shop for automakers — for everything from data collection, cloud storage, and analytics to in-car navigation to voice assistants to autonomous driving capabilities.”

That said, these companies are trying to capitalize on an opportunity of the automotive industry’s own making. Car companies have been providing notoriously bad infotainment systems for years, with sometimes clunky and confusing in-dash offerings that pale in comparison to the maps and music people can pull up on their phones. Ford even agreed to pay $17 million in 2019 to settle a class action lawsuit over how awful its Microsoft-powered MyFord Touch system was. Now, they’re increasingly turning to Big Tech to provide what they can’t or won’t.

“Carmakers choose to partner with tech companies to improve the experience for their customers,” Google spokesperson Peter Schottenfels told Recode.

That’s why almost every new car sold has support for Google’s Android Auto, Apple’s CarPlay, or Amazon’s Alexa, if not all three. Industry analysts believe Google’s Android Automotive Operating System (AAOS) will be in 70 percent of new cars by 2028, a huge and rapid leap from the less than 1 percent of new cars it’s in today. (Android Auto and AAOS are not the same thing; Android Auto runs on your Android phone, which connects to your car; AAOS is built into the car itself.) When you’re in the driver’s seat, Siri, Alexa, and Google Assistant are riding along with you.

Warren says that while people “deserve lower costs and greater choices” in their cars, she believes allowing Big Tech to dominate that space will “likely have the opposite effect” in time.

The letter accuses Big Tech of using some of the same tactics it has used in other industries to solidify its place in this one. Amazon boasts that its Alexa Auto makes it easy for users to order Amazon products from the comfort of their car while they’re waiting at a red light, or listen to an audiobook from Amazon’s Audible while they’re sitting in traffic. If a carmaker wants to offer Google Maps, it has to purchase Google Automotive Services, which includes Assistant and Play Store, a practice Warren likens to Microsoft’s bundling of Internet Explorer and Windows, which gave Microsoft a huge share of the internet browser market but also got it in a lot of antitrust trouble in the late 90s.

Google and Amazon have entered into agreements with carmakers to include their offerings pre-installed and by default, which Warren compares to Google’s agreement with Apple to offer Google Search as the default search engine on Apple’s Safari browser. And, she notes, Apple forces third-party developers to go through and get approved by it before their apps can be offered to users through CarPlay, just as it does with the App Store on mobile devices.

“Allowing Big Tech companies to cement their exclusive control over the terms of auto app competition could stifle a nascent industry,” she writes.

Warren also touches on the data that these companies can collect from our cars, and how it may give them a rich and exclusive source of data they may use to assist in their autonomous vehicle projects. And that, in turn, may well give them a future competitive edge over the same car companies that are using their services now. Big Tech isn’t just trying to get into other companies’ dashboards; it’s making its own, too.

Finally, Warren warns that Big Tech companies are buying up potential and actual competitors, from Google’s acquisition of Maps competitor Waze to Amazon’s interest in self-driving vans and trucks to power its delivery services.

Google’s Schottenfels says consumers and carmakers still have many choices when it comes to what powers their cars. “Not only is there enormous competition in the connected car space — including Apple CarPlay, Amazon Alexa, Cerence, and others — but carmakers continue to invest in their in-house solutions simultaneously,” he said.

Apple and Amazon did not respond to a request for comment on the letter.

Warren says this is a chance for antitrust enforcers to get ahead of companies that threaten to monopolize an industry rather than acting only after that monopolization has already happened and when it’s far more difficult to do anything about it. Kanter and Khan both have expressed the desire to be more proactive about anti-competitive threats, but that’s easier said than done. In the US, antitrust laws — or, really, the courts’ interpretations of them — favor businesses, and cases may drag on for years, if not decades. But those efforts do sometimes get results; after all, Microsoft did ultimately agree to unbundle Internet Explorer from Windows.

Warren’s letter won’t do anything on its own. But if Big Tech companies see that their expansion into cars might be checked before it really starts, they may address some of her concerns before they’re forced to. We’ve seen Apple loosen some of its grip over its phones in recent years, like making it easier to pick which search engine you use in its Safari browser and allowing you to delete most of Apple’s built-in apps from your iPhone’s home screen. They may also be more reluctant to acquire companies if they feel that the chances those acquisitions will be challenged are high enough.

We’ve also seen attempts in Congress to address some of these concerns, like antitrust bills that would ban self-preferencing and open up app stores. Those bills appear to be dead for now, but there’s always a chance they’ll come back next Congress.

“The FTC and DOJ don’t have to wait until there’s a problem to take action,” Warren says. “Now is the time to prevent Big Tech from strangling competition in the automotive industry before it’s too late.”

This story was first published in the Recode newsletter. Sign up here so you don’t miss the next one!