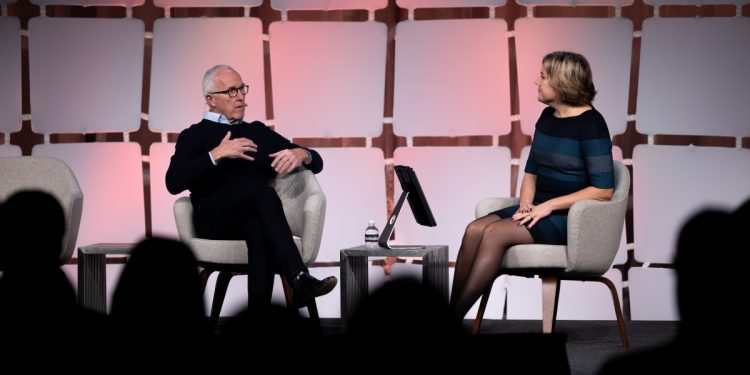 1:50 Nelson says everyone is a designer, whether they realize it or not.

But professional designers are often designing for things that they won’t directly use. For example, when Kyndryl worked with Dow Chemical to design for their engineers, it was important to understand the users’ process. Nelson calls collaborating with a diverse group of people to come up with good design “co-creation.”

1:38 Up next, we’ll be hearing from Sarah B. Nelson, chief design officer at infrastructure service provider Kyndryl. She will be sharing ideas on how to design for human-centered organizations of the future.

1:36 Welcome back to this afternoon’s session of EmTech, where we’ll be learning about what’s next in artificial intelligence. I’m Tammy, a reporting fellow with MIT Technology Review.

12.25 That’s it for this morning’s sessions! We’re going to take an hour’s break for lunch, but will be back afterwards when my colleague Tammy Xu is going to be handling our AI sessions. Catch you later!

12.15 Matsuhisa has been working on stretchable sensors and displays that could be installed on your skin, flexible and lightweight enough to sit undisturbed on your wrist, for example.

He became involved in the field purely out of curiosity he says. The concept of stretchy conductors really appealed to him, and he has since invested a lot of time into developing new, flexible devices. They could prove extremely beneficial in the development of soft robots, he suspects.

12.04 Where is technology heading next? The individuals on our MIT Technology Review’s Innovators Under 35 list, our annual search for the brightest young minds tackling the biggest technological challenges, are dedicated to finding out.

Naoji Matsuhisa is an associate professor at the Institute of Industrial Science at the University of Tokyo, and a recipient of the 2022 Innovator Under 35 list for his work with  stretchable electronic materials and devices. He has developed a stretchy diode made of thin rubber sheets to help monitor people’s health more efficiently than more rigid devices, which are poor at maintaining good skin contact.

12.00 There are billions of interactions with Alexa every day, so the quickest way to reach a trillion interactions would be through more devices answering a wider range of requests, Sharma says.

When asked how to build a knowledge graph, he laughs and admits that’s a big question. “That’s actually a pretty big undertaking—a lot of the information in the world contradicts each other,” he says, but acknowledges it’s not all purely technological—on the whole, such large-scale knowledge graphs still rely on humans to keep them accurate and healthy.

Vishal Sharma is optimistic about the future of ambient computing

11.50 The rise of voice assistants and ambient AI computing has been pretty phenomenal, and helped to usher in new forms of computing that will continue to unfold over decades, says Sharma. “You don’t want this thing to feel like a tool, you want it to feel like it’s part of you,” he says. “When you’re putting on smart glasses, you want to move on from holding a phone in your hand to something that’s new to you.”

11.30 Voice assistants have been one of the biggest consumer tech success stories of the past decade, with 60% of US households believed to currently own a smart speaker. We’re now going to hear from Vishal Sharma, the vice president of Alexa AI at Amazon, which spearheaded the smart speaker sector with the launch of the first Amazon Echo in 2014.

Sharma is going to dig into the future of voice computing and how it’s revolutionizing the way humans interact with their devices, and, crucially, their data.

11.25 Herr lost both legs below the knee following a mountain climbing accident when he was 17, and uses smart prostheses. He says he hopes to go under the knife again in the hopes of getting critical tissue manipulations and implants, in the hopes of making the relationship he has with his prostheses closer to that other people have with their ankles.

“It’s kind of like never being able to drive, like you’re always in the backseat of a car,” he says. “And if someone’s driving, I want my hands on the wheel and actually want to be part of the car.”

Hugh Herr describes his lab’s work to the audience

Another project revolves around the pursuit of improving the current technology designed to help people with spinal cord injuries. Many people with these types of injuries typically use a wheelchair, while the lucky few who can afford it can use exoskeleton devices with external motors and processors that move in parallel. Herr’s lab wants to activate a person’s existing skeletal muscles by shining light on the skin to activate the nerves underneath.

11.00 We’re back, and next on the agenda is Hugh Herr, a media arts and sciences professor at the MIT Media Lab and co-director at the K. Lisa Yang Center for Bionics. He is a leader in the emerging field of Biomechatronics: technologies designed to accelerate the enhancement of the human body using machinery.

10.28 We’re now going to take a half-an-hour break, and when we come back we’re talking all things body tech. See you on the other side!

10.20 AR works best in environments such as museums, galleries or other cultural institutions when it’s least expected, says Cason. Layering an AR experience over the top of a piece of art that’s already beautiful risks detracting from it, she says, whereas if you put an experience around something like a sign, or a box, people are surprised and delighted to interact with it—which is exactly the kind of reaction its creators want.

A metaverse-style approach to AR is not something she can ever see taking off. “I don’t want to fully invest in an AR or VR world,” she says. “I’m not super-excited about it because AR is for a specific time, it doesn’t work properly when it’s on all the time.”

10.10 AR is a more natural way of interacting with technology than VR, says Murphy, because it tallies with the way we move through the world, including how we move our heads to look around us. “AR really aligns to how we as humans already naturally operate,” he adds.

“AR is a key component of our ability to drive engagement and enable people to do some fun and really exciting things,” he says.

“It’s true there’s a lot of potential privacy risks in the way AR is used,” he adds. “We look to always put a time limit and an expiration date on data and keep it for the minimum amount of time needed to get it to work effectively.”

09.50 Next on the agenda is augmented reality (AR)—the technology we use to layer digital elements including everything from interactive filters to gaming assets into our real-world environment.

Joining Charlotte onstage is Lauren Cason, a creative technologist who’s worked on award-winning video games including the charming Monument Valley 2, and Bobby Murphy, one of the cofounders and current CTO of Snap.

09.45 As a society, we need a project, says McCourt. He wants to know where the innovation is, and where we can find the space for discussions regardless of politics, backgrounds, race and ethnicity. Focusing on a single project, such as the race to get a man on the moon, or the human genome project, helps to focus people’s attentions and heighten the likelihood of actually achieving something.

“We’re in a new Cold War,” he says. “We want all democracies to get involved with Project Liberty, but Europe seems like the place to start because they’re ahead in terms of public policy objectives, such as human rights. In the US, our technology is being used much more like it is in China because it’s centralized, our data is scooped up and can be used to manipulate people.”

09.25 If our information is corrupted, everything just becomes noise, says McCourt. Focusing primarily on fixing the inherent problems with social media doesn’t mean it’s the be all and end all when it comes to cleaning up the internet, but it’s a worthwhile place to start because of its disproportionate power. “I just don’t think tweaking what we have is going to work,” he says. “This is the moment right now to fix the internet—and get it right this time.”

09.10 What will it take to remake the internet into a fairer, more equitable place? Frank H. McCourt, Jr, a civic entrepreneur and the CEO of investment firm McCourt Global, believes the current internet is built on a fundamentally broken model. Instead, he believes, we should be looking to a new internet architecture built around the needs of users, rather than corporations.

09.00 Hello, and welcome back to the final day of EmTech 2022! I’m Rhiannon, a reporter at MIT Technology Review, and today we’re going to be focusing on the technologies that hold the biggest potential to change our lives, one innovation at a time.

We’re going to dive straight in with some welcome remarks from our news editor, Charlotte Jee.

Come back to this page for rolling updates throughout the day as we kick off the final day of EmTech 2022, MIT Technology Review’s flagship event on emerging technology and global trends.

Global changemakers, innovators, and industry veterans will take to the stage ​​to distinguish what’s probable, plausible, and possible with tomorrow’s breakthrough technologies.

We’ll be hearing from some of the biggest names in the industry, discussing everything from how to get promising ideas off the ground and commercialize space, to building tomorrow’s AI and tackling the world’s biggest challenges.

Today we’ll be focusing on unpacking what the future holds for Web 3.0, body tech, and AI. Yesterday’s schedule explored the exciting technologies promising to change our lives.

Programming starts at 9am ET, and it’s not too late to get online-only access tickets, if you haven’t already.