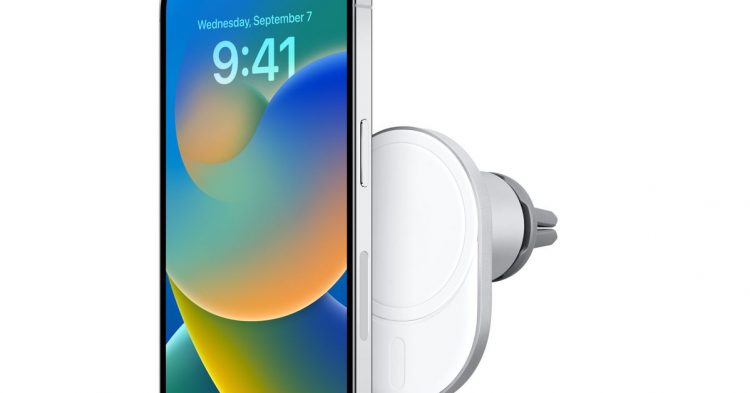 A mere two years after Apple introduced MagSafe for iPhones, we’re finally getting the accessory that probably should’ve launched with it: a magnetic car mount that’s also capable of actually charging your phone. As 9to5Mac spotted, Belkin has announced its Boost Charge Pro Wireless Car Charger With MagSafe, which is available for pre-order on the Apple store.

I know what some of you may be thinking: “wait, Amazon is flooded with MagSafe car chargers, and they’re nowhere even close to $100. What makes this one special?” The answer is that this one is actually MagSafe, where the rest are MagSafe compatible. That means that they use a ring of magnets to hold your phone, and standard Qi charging that can’t pump as much power into your phone — because Apple won’t let it. (Some really suspicious listings say they can do 15W charging, but it seems like they mean that the coil in it is technically capable of fast wireless charging for phones that aren’t iPhones.) But one that has the iPhone maker’s official blessing is finally here… and it seems a bit difficult to recommend.

One of my colleagues said the part that grabs the vent looks a bit like Greedo, and now I can’t unsee it. Image: Apple

The Belkin’s extremely wordy name basically spells out exactly how it works: you clip it onto your car vent, and it holds your iPhone up so you can see whatever maps or music controls are on it (in theory, anyways — a lot of car vents struggle to stay in place under the weight of a phone and mount). It’ll also provide 15W of charging power, more than iPhones can pull from standard Qi chargers.

As I said before, this is a pretty obvious use for Apple’s MagSafe tech. That’s why it was so surprising when Belkin basically announced this exact thing the day after the iPhone 12 introduced MagSafe — except it cost $40 and it bafflingly left off the ability to actually charge your phone. You know, the main thing you’d want it to do if you were trying to use a power-hungry navigation app.

Unlike that model, Belkin’s new accessory includes a built-in USB-C cable to get the power from your car to your phone. I was going to be mad about that, because most cars modern enough to have USB-C ports will probably come with CarPlay (though there are notable exceptions), making this accessory far less necessary. Thankfully, Belkin also includes a 12V car charger adapter for people whose cars come with USB-A ports or no phone charging capabilities to speak of. That seems sensible enough, and I can’t think of any situations where that would be a problem, though I might’ve preferred a removable cable on a product that’ll probably be constantly exposed to sunlight.

The mount can also swivel your phone from portrait to landscape, for however you like to see your directions. For the most part it, seems like a perfectly competent accessory —except that, again, it costs $99.95.

I do understand that MagSafe accessories generally don’t come cheap, but I think most people will probably want to at least consider other, less expensive options. Spigen makes a $21 version of this that acts as a receptacle for a $39 MagSafe puck. Even if you splurge for a fancy $20 dual USB-C 12V adapter (because it doesn’t come with one), you’d still be saving a decent chunk of change. Plus, Spigen’s version comes in black, while Belkin’s version only comes in white, which will stand out like a sore thumb against most dashboards.

You could also get Belkin’s $60 BoostCharge Magnetic Wireless Car Charger, which is “MagSafe compatible,” meaning it holds your phone using magnets, but can only charge at 10W, instead of 15W. Given that I’d expect faster wireless charging to overheat my phone during the summer, I might gravitate towards that version over the MagSafe ones.

If you don’t like either of those options, though, the Belkin Boost Charge Pro Wireless Car Charger with MagSafe starts shipping on November 14th.