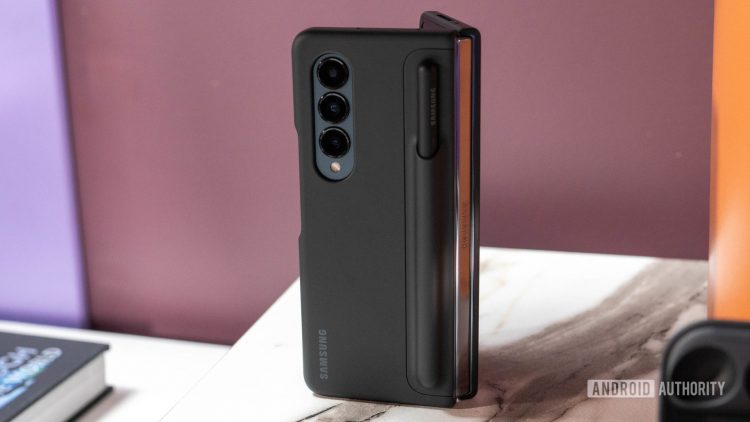 It might not be a big departure from 2021’s Galaxy Z Fold 3, but Samsung’s latest flagship foldable is here in the Galaxy Z Fold 4. However, if you’re planning on picking one up, you’ll want to protect your investment as long as possible. To help, we’ve tested and selected the best Samsung Galaxy Z Fold 4 cases you can buy.

A productivity machine with a powerful SoC.

The Galaxy Z Fold 4 is impressive in many ways. The large display will give your productivity a boost, while the high-end SoC makes sure everything runs smoothly. The build quality is outstanding as well considering the foldable nature of the device.

The UAG Civilian offers complete coverage in a thin and protective package. This hinged, one-piece case is made from featherlight composite materials and features an impact-resistant soft core and impact-resistant bumpers, making it a modern, rugged defender of your Fold. The UAG Civilian offers the protection you need to stand up against accidental drops and all the bumps, scrapes, and fumbles that come with real-world use. The raised screen surround is a precise fit, and the protective spine connection moves seamlessly into both open and closed positions.

If you want the thinnest possible case, we recommend this ultra-lightweight case from Spigen. The Galaxy Z Fold 4 is a heavy phone, and we love how this case protects from simple drops and scratches without adding any bulk whatsoever. It won’t hold up to serious drops and falls, but it does come in two colors: black and clear.

Otterbox is best known for ultra-rugged cases, but the Thin Flex is something different. It’s a simple, thin, polycarbonate case with the same great build quality you’d expect from other Otterbox cases. It’s not particularly unique, but it does come in a wide variety of colors, including some with a clear backing to show off your phone’s true colors.

The Incipio Grip is one of the most popular cases on the market, and the version of the case for the Galaxy Z Fold 4 is yet another winner. We love the extra grips along the sides of the phone, which serve to prevent damage before it happens. If the phone does somehow slip out of your hand, it still has shock absorbent technology baked in, plus raised bezels to protect the screen.

While it isn’t nearly as thin as the Air Skin above, the Spigen Neo Hybrid S has one huge advantage: a kickstand. And this isn’t some flimsy plastic kickstand, either. It’s a thin metal plate that hugs the back of the phone when not in use, and folds out to support the phone in tablet mode for optimal viewing. There’s also some Air Cushion protection and a grippy surface on the back to help keep it safe from drops and slips. However, it’s not the thinnest and does add a bit of bulk.

If you want a simple clear case for the Z Fold 4 that won’t break the bank, Spigen once again has your back. The Ultra Hybrid is one of our favorite clear cases for normal phones, and the version for Samsung’s foldable is yet another winner. It’s significantly more resistant than the clear Air Skin above with a mix of polycarbonate and TPU materials. However, like all clear cases, we found it a bit difficult to keep clean.

The Presidio Perfect is remarkably similar to the case above. It’s a simple clear case with no major frills, but it offers up to 13 feet of drop protection, which is above and beyond what Spigen promises. Obviously, we wouldn’t recommend taking them up on that claim, as the hinge is still left unprotected while the phone is closed. It comes in clear and glittery finishes, both with an antimicrobial layer to prevent bacteria buildup.

Want a bit more class and brand value? This Kate Spade New York Protective Hardshell case uses fairly simple materials, but makes up for it with two eye-catching designs: Hollyhock Floral and Scattered Flowers Iridescent. Both are clear cases with a simple, elegant floral design. Despite the name, we also found it to be rather slim, although it won’t offer too much in the way of protection beyond basic scratch resistance.

Spigen offers a wide variety of cases, and the Slim Armor Pro for the Galaxy Z Fold 4 features an all-new design that really won us over. It still offers excellent protection with several layers of Air Cushion technology, but the new hinge mechanism keeps the most vulnerable part of the phone protected at all times. Naturally, this does add some bulk to the device. There’s also a model with an S-Pen holder, which keeps your pen secure in a slot at the end of the phone.

Otterbox is one of our favorite brands for rugged cases, and although its most resistant cases aren’t offered for the Z Fold 4, this version of the Symmetry Series is as good as it gets. It greatly exceeds military-grade resistance with beefy bumpers and a full-length hinge strap. All that protection comes at a cost, and that cost is bulk. It comes in black, brown, or blue and will ship close to the official release date of the phone.

Samsung currently only sells one first-party case for the Galaxy Z Fold 4, but it’s one of the best around. The Standing Cover with S Pen is slim and form-fitting, but with an integrated slot for the new S Pen Fold Edition. Even better, the S Pen itself comes with the case. There’s also a kickstand to hold it up while open, although it only works in horizontal format and isn’t adjustable. This case comes in three colors: Black, Graygreen, and Sand.

On the surface, this is a simple thin case, but this specific model comes with a built-in S-Pen slot. Unlike Samsung’s official case, the slot is on the end of the phone, which keeps the profile relatively slim and pocketable. However, it makes the phone slightly longer, and we found it a bit troublesome to hit the buttons while closed. Still, it’s significantly cheaper than most other Galaxy Z Fold 4 cases.

5 reasons the crypto bear market is good for innovation