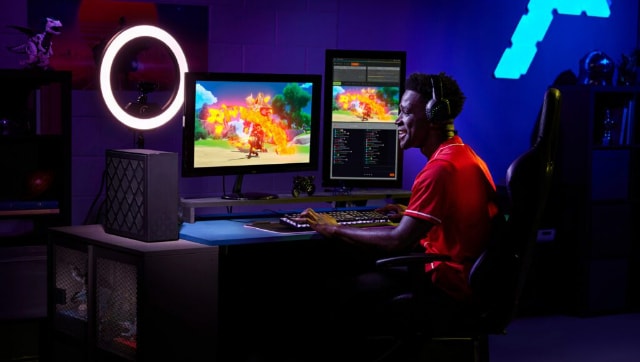 Intel has launched their new NUC 13 Extreme Kit, code-named Raptor Canyon and the NUC 13 Extreme Compute Element, two new mini PCs that are all set to shake up hardcore gamers and serious content creators, which are the most powerful NUCs Intel has ever built.

Both, the NUC 13 Extreme Kit and the NUC 13 Extreme Compute element come with unlocked 13th Gen Intel Core desktop processors, such as the Intel i5 13600k, i7 13700k, i9 13900k CPUs and space for a triple-slot, 12-inch GPU to unleash even more performance for enthusiast gamers and content creators.

The modular Intel NUC 13 Extreme achieves incredible speed with up to a 13th Gen Intel Core i9 desktop processor with eight Performance-cores (P-cores) and 16 Efficient-cores (E-cores), 32 threads and up to an incredible 5.8 GHz max turbo frequency. Because these NUCs are being powered by a K series processor, users have the option to use them without a GPU, but if they really want to get the most out of their mini PCs, they will need to add a decent GPU to it.

Another advantage that the K-series processors bring, as with all 13th Gen Intel CPUs, is that it gives the users the ability to overclock these chips. All the NUCs in the series come with PCIe 5.0  x16 slot, with 3x 6+2-pin PCIe power connectors, which will be able to support up to GPUs that draw up to 450W at their peak. Powering the entire NUC is a fully modular 750W 80+ Gold SFX 12VO power supply.

The NUC 13 Extreme includes all the additional features and connectivity gamers need, including:

“This year marks the 10-year anniversary of our impressive lineup of Intel NUC products, and the Raptor Canyon NUC 13 is an excellent representation of how far we’ve come. Our first-ever NUC demonstrated a breakthrough in the miniaturization of a small desktop PC into an ultra-small PC form factor. While much larger than our tiniest mini-PC, our latest Intel NUC 13 Extreme sets a new bar for how to pack stellar gaming performance in a form factor that is 70% smaller than a typical 50L gaming tower,” said Brian McCarson, Intel Vice President and General Manager of the Intel NUC Group Availability.

He also added, “Along with the epic performance you expect from an Intel NUC product, we also deliver exceptional product quality and feature density in a completely modular and customizable design.”

How to Add Fonts to Windows (and Where to Find Them)