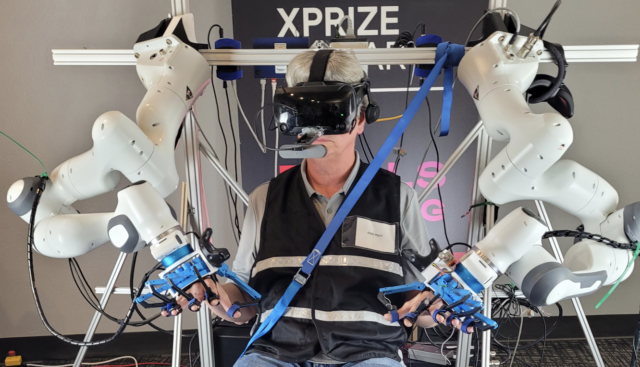 NimbRo’s operator in action. (Photo: Autonomous Intelligent Systems, University of Bonn)Telepresence isn’t always about Star Wars-style holograms. Sometimes it’s about transporting a remote individual’s actions and expressions to another place using a bulky, VR-driven robot, as demonstrated over the weekend in southern California.

XPrize, an organization known for its incentivized tech challenges, hosted a $10 million competition on Saturday inviting robotics companies from around the world to show off their telepresence technology. Seventeen teams demonstrated their own takes on the “Avatar robot,” a device that allows remote individuals to communicate and operate in a location other than their own. At the end of the day, the Autonomous Intelligent Systems group from Germany’s University of Bonn took home a $5 million prize for NimbRo, a robot controlled via virtual reality (VR) headset and exoskeletal arms.

NimbRo itself is made up of a humanoid robotic torso with two Panda arms, each capable of carrying approximately 6.6 pounds. The “head” consists of a tablet and two cameras mounted between the shoulders, the latter of which streams 4K video to the operator at 45 hertz. The torso is mounted on a holonomic platform with four omnidirectional wheels, which enable NimbRo to move at a maximum of 1.5 meters per second.

The operator provides their physical and verbal inputs from a separate location. An HTC Vive Pro headset tracks the operator’s eye movements, while two SenseGlove exoskeleton haptic interaction devices capture even the slightest hand movements, allowing NimbRo’s finger joints to move in tandem with the operator’s. The operator’s movement data (as well as the visuals captured on NimbRo’s cameras) is transmitted through a single Ethernet and power tether at one gigabit per second. As the operator moves, so does NimbRo, bringing the remote operator “to life” in a physical space they wouldn’t otherwise be able to occupy.

NimbRo didn’t just have to demonstrate its physical capabilities on Saturday—it also had to be relatively intuitive, since a judge was operating it instead of someone from the Autonomous Intelligent Systems team. In front of more than 2,000 virtual and in-person audience members, NimbRo performed all ten task challenges in just under six minutes, cutting the second-place team’s time nearly in half. Task challenges included interacting with a human, using an electric drill to unscrew a metal panel, and obtaining select items from a storage area. NimbRo even did a little dance after completing the last task.

How Animated Explainer Videos Can Help Your Business Grow