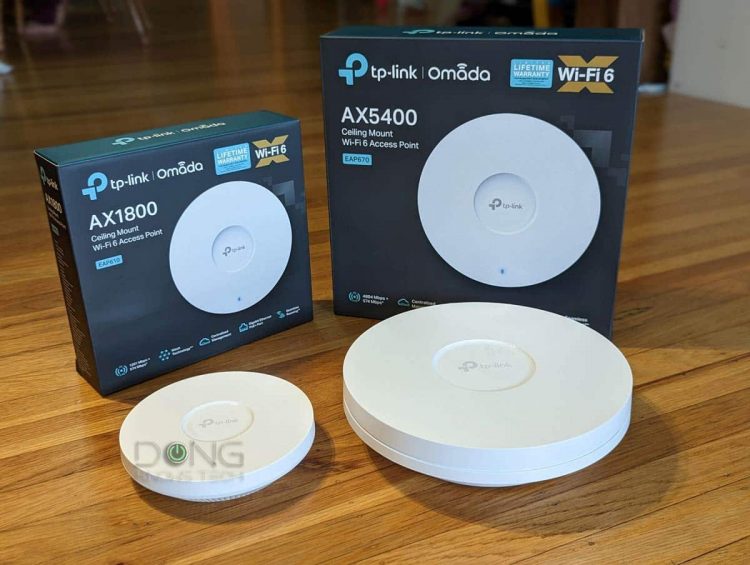 This Omada EAP670 vs EAP610 matchup represents the top and bottom tiers of TP-Link’s Wi-Fi 6 business access points (APs). They replace the EAP245 and other Wi-Fi Wi-Fi 5 variants.

The EAP670 is a top-tier broadcaster, and the EAP610 is entry-level. (In between them, there are a couple of mid-tier models.) Other than the differences in hardware specs and physical sizes, these APs share the same characteristic as the rest of the TP-Link Omada family.

Among other things, they can work together to form an Omada mesh system. In this review, however, I evaluate each as a single standalone PoE access point.

Here’s the bottom line: For the current price of $150 and $90, the Omada EA670 and Omada EA610 are excellent purchases for anyone who needs a quick way to add or scale up Wi-Fi 6 coverage in a large home.

And you’ll figure out which one to get when you’re through with this review. Check out this post on TP-Link’s Omada mesh for more about using multiple units in a robust business Wi-Fi system.

TP-Link Omada EAP670 vs EAP610: The access points and their retail boxes.

If you look at the Omada EAP670 or Omada EAP610 individually for the first time, you might be unable to tell one from the other. They are practically the same taking a round shape — designed to be wall- or ceiling-mounted — with one PoE network port.

When put near each other, though, the latter is the mini version of the former. And on the inside, the two are also vastly different in terms of hardware specs.

Besides being much more significant — about twice the size –, the EAP670 also has higher Wi-Fi specs and support for 160MHz. It also has a 2.5GbE (PoE) port to deliver better Wi-Fi throughputs.

The EA610 is noticeably more affordable.

Other than that, the two are very similar, sharing the same firmware and features. They also share the same power adapter and PoE+ standard.

Both broadcasters support Power over Ethernet (PoE) and require the 802.3at standard (PoE+) or higher. To use either, you need first to get your home wired.

Like the case of all Omada access points, the EAP670 and EAP610 come with a familiar local user web interface. Consequently, you can use each as a standalone broadcaster without an account with TP-Link, which is always great for privacy.

What’s more, you can set up each the standard way you do any PoE access point. But here is the gist to get each of them installed in a network:

The next step is to set up the AP’s Wi-Fi network, which is very simple as long as you know its IP address. Since the device doesn’t have an IP of its own — it gets one from the network’s router — you need to look for it on the router’s list of connected clients.

Once you’ve figured out the IP, enter it into a local computer’s browser, and the AP’s web interface will greet you.

It’s simple to set up a TP-Link Omada Wi-Fi 6 access point to work as a standalone broadcaster. All you have to do is pick an SSID for each of the Wi-Fi bands.

Here’s what you can the only thing you need to do is pick the SSID and passwords for each band (2.4GHz and 5GHz), and you’re good to go.

Or you can dig into the interface to further customize many more features and settings, even as a standalone single Wi-Fi broadcaster — more on that below the photos.

TP-Link Omada EAP670 vs EAP610: The former (left) is much larger. That’s my hand, which, despite being oversize, generally remains the same physically.

TP-Link Omada EAP670 vs EAP610: Their tops and undersides. In case you haven’t noticed, I took these photos indoors — it’s been raining in California for the first time in almost a year.

And here’s the underside of the TP-Link Omada EAP610 — note its Gigabit PoE port.

Here are the TP-Link Omada EAP670 and EAP610 in action. The placement is for demonstration only.

For example, you can create multiple SSIDs for each band — up to 8 per band — and set up IP isolations or signal captive portals for each.

Each TP-Link Omada access point offers many features and settings, even as a standalone broadcaster. These screenshots are of the EAP670 but they resemble those of any Omada AP.

On top of that, there are also advanced features such as QoS, MAC filtering, Wi-Fi scheduling, band-steering, VLAN, and so on.

Most importantly, the web interface is well-organized and responsive, among the best I’ve used in business access points, and better than the case of ZyXel, Trendnet, or even Netgear.

If you don’t care about extra features, you can use the interface to quickly check on the status of the AP and its network. This screenshot is of the EAP610 fresh after the initial setup process.

The EAP67 and EAP610 (as well as other Omada access points) are mesh-ready. You can use multiple units to extend the Wi-Fi coverage for a large area.

However, a controller, such as the OC200 or OC300, or a computer with the controller software is recommended in this case. I described that scenario in detail in this post on TP-Link Omada mesh.

I tested the EAP670 and EAP610 together and separately for over a week, and both proved impressive, landing among the fastest Wi-Fi 6 access points for their tiers.

The former was markedly faster among the two thanks to the higher Wi-Fi specs and the 2.5GbE port. But the EAP610 also held its own, as you’ll note in the charts.

Both access points passed my 3-day stress test with zero issues or disconnections. They worked well with the included power adapter and when powered by my Zyxel XS1930-12HP PoE++ switch.

In all, these two access points are both excellent for their price points. I was impressed by how well they worked.

Excellent Wi-Fi 6 performance and coverage at a low cost

Lots of settings and features, including Wi-Fi captive portals and mesh function

Easy to mount with included accessories

The EAP670 is bulky, and the EAP610 has no Multi-Gig port; both could be more user-friendly for home users

The Omada EAP670 and Omada EAP610 from TP-Link are the excellent standalone access point for their price point. They are great deals.

No matter which you get, each is a straightforward, well-performing Dual-band Wi-Fi 6 broadcaster to boot, with more potential down the line.

As for which you should get, the EAP670 is excellent for a home with Gigabit or faster Internet; and the EAP610 is for those with a more modest bandwidth need.

While the former has a better range, you can always get multiple units to scale up the coverage — check out my take on Omada mesh for more. In any case, make sure to get your home wired with network cables first.