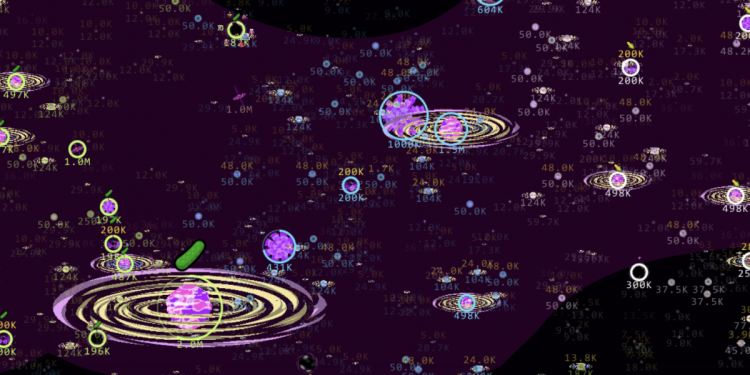 To Bhardwaj and other true believers, Dark Forest is proof of several new concepts at once. First, it demonstrates how advanced cryptography can be used to add new features to online worlds. Developers and computer scientists inspired by Dark Forest are already exploring new games and applications that take advantage of zero-knowledge proofs.

Gubsheep and others have even launched an R&D organization, called 0xPARC (a reference to PARC, the storied R&D company that Xerox launched 40 years ago), to support this work. Bhardwaj recently did a stint as a 0xPARC intern.

The scope of 0xPARC is not limited to gaming. For example, one application the group is interested in is digital identification. Recall the passport example. Zero-knowledge proofs could make it possible to prove all kinds of things about yourself without revealing anything else. You could prove you were above a certain age without revealing your actual age, or that you have more than a certain amount of money in your bank account without revealing the actual amount. It could also be possible to use zero-knowledge cryptography to prove that you’ve run a machine-learning algorithm on a sensitive data set while keeping the data private, says Gubsheep.

A new vision for the metaverse?

Zero knowledge is also not the only focus at 0xPARC. The deepest thinkers about Dark Forest seem to agree that while its use of cryptography is genuinely innovative, an even more compelling proof of concept in the game is its “autonomous” game world—an online environment that no one controls, and which cannot be taken down.

So far, Dark Forest has existed in temporary instances, called rounds, that last between one and two weeks. But since it exists entirely in blockchain smart contracts—computer programs that the blockchain stores and executes—a Dark Forest world could be deployed in such a way that no one would have the capability to stop it, says computer scientist and 0xPARC cofounder Justin Glibert. “You could think of it like a Minecraft server but it can’t be taken down,” he says.

Once a smart contract is deployed, it’s a bit like a robot that lives in digital space—one that can run forever. Unless the creator installs a mechanism that can be triggered to kill the program, it will keep running as long as the network exists. In this case, Glibert argues, the virtual world would be “more like a digital planet” than a game.

What happens on a digital planet? Whatever the world’s rules—its “digital physics”—allow, he says. Dark Forest players have used its digital physics to build in-game marketplaces, tools that automate game functions, and even bots that can play the game themselves. It’s also free for anyone to copy, modify, and build on.

Glibert’s team at 0xPARC is focused on creating systems that make it easier not only for game developers to create autonomous worlds but also for the inhabitants of those worlds to interact and create.

Gubsheep says this is the natural development of the internet. “The digital world is becoming the host of more and more of our most meaningful interactions,” he says. But he wagers that people will be less likely to accept a version of “the metaverse” that is governed by a company or any other centralized entity.

What they will want instead is “a credibly neutral substrate for people to express themselves in relatively unconstrained ways and to self-organize and self-govern,” he argues. “That’s a much more powerful vision of the metaverse to me, and one that I hope 0xPARC’s experiments can contribute to.”