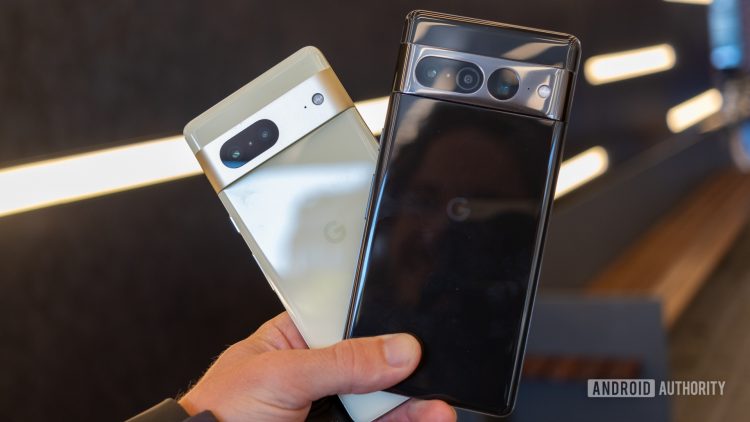 Google has been at the top of the game for years now when it comes to image processing. There’s no denying that the Mountain View company’s vast resources in Artificial intelligence (AI) and Machine Learning (ML) have directly led to Pixel phones becoming some of the most coveted devices for their photography skills. And Google has constantly proven that the megapixel and hardware race has nothing to do with quality photos.

With the Pixel 7 and 7 Pro, Google took the original camera setup of the Pixel 6 series, made some hardware changes, and worked even harder on improving computational processing, resulting in two of the best camera phones you can pick up right now. But what’s the difference between the Pixel 7 vs Pixel 7 Pro cameras, and how do their images compare? We pitted the two Google handsets against each other. Here are the results.

Also see: These are the best camera phones you can get right now

Google Pixel 7 vs Pixel 7 Pro camera: What you need to know

Before we get down to brass tacks, let’s take a quick look at how the camera specs of the Pixel 7 and Pixel 7 Pro compare on paper. It’ll give you a better understanding of the image samples you are about to see.

To start with, both phones offer a 50MP primary shooter, which is the Samsung Isocell GN1 sensor. They also have the 12MP ultrawide camera in common, but the Pro model offers a wider 125.8-degree field of view compared to the standard Pixel 7’s 114-degree FoV. It also supports autofocus and macro focus.

The biggest differentiator in the Pixel 7 Pro’s camera setup is the 48MP telephoto shooter that now gets 5x optical zoom compared to 4x from last year’s 6 Pro. The Pixel 7 lacks a telephoto sensor altogether.

Regardless of the camera hardware differences between the Pixel 7 and 7 Pro, both devices are blessed with Google’s AI and machine learning magic thanks to the Tensor G2 chip. So you get many of the same camera features on the Pixel 7 as the 7 Pro. Following are the photography features common to both flagships:

Let’s start with a batch of photos from the main camera. Shots from the 50MP sensor of the Pixel 7 and 7 Pro are nearly identical. Both phones take very good pictures with the standard camera, producing sharp, well-exposed images that don’t overdo it on the color front like Samsung phones. That said, photos don’t fall flat for sure. With better processing powers, the Pixel 7 and 7 Pro bring out natural, accurate color tones consistent across different sensors. You’ll see this as we go along in this comparison.

If you’re someone who likes punchier photos, you can always deploy filters and editing enhancements to change the way your images look. I personally prefer more conservative, true-to-source pictures compared to oversaturated ones, and that’s what you get with the Pixel 7 and 7 Pro.

Below are some more standard Pixel 7 and 7 Pro photos to show you what the primary camera is capable of without any alterations.

When it comes to ultrawide photography, the Pixel 7 and 7 Pro use a 12MP sensor. The smaller Pixel dials images out to 0.7x vs 0.5x on the bigger handset, meaning the Pro can take wider shots than the non-Pro model. The difference is especially noticeable when you compare the bottom-up ultrawide shots of the spiral staircase.

That said, ultrawide photos come down to personal preference. Your choice between the Pixel 7 and 7 Pro depends on how large an angle you prefer. Personally, I find the Pixel 7’s ultrawide camera pretty satisfactory, but you might like the 7 Pro if you tend to photograph landscapes, large groups of people, or anything that requires you to fit more in a shot.

You evidently lose a bit of detail and sharpness in the ultrawide shots from both phones. You’ll also notice some noise here and there. But the photos are more than usable for places like social media and elsewhere around the web. Even small prints will be more than fine.

The Pixel 7 takes a clear hit compared to the 7 Pro in the zoom department because it lacks a telephoto shooter. The phone still manages to crop at a decent quality with its 2x zoom, but anything beyond it is sub-par compared to the Pixel 7 Pro. Even at 2x zoom, the 7 Pro excels slightly with sharper details around the edges and somewhat better colors.

There’s a notable difference in shots beyond 3x zoom, where the Pixel 7 Pro produces more detailed images. You can see 5x samples from both phones below. Thanks to its tele lens, the 7 Pro undoubtedly keeps the sharpness of the bottles intact, whereas the vanilla Pixel fails to do so.

At the far end, the Pixel 7 Pro offers 30x Super Res zoom, while the Pixel 7 tops out at 8x. The latter produces largely unacceptable results, although Google’s software tries to compensate for the quality loss to some extent. You can see below how much superior a 10x zoom image from the Pixel 7 Pro is compared to the Pixel 7’s 8x zoom, even when they capture different subjects.

The Pixel 7 Pro features a new Macro Focus mode, which is absent from the regular 7. The larger phone doesn’t actually feature a dedicated macro lens but instead uses its ultrawide lens and autofocus to zoom into a subject. This lets it snap closeups of things as close as three centimeters away.

Below you can see examples of going physically as close as possible to a subject with the Pixel 7 versus Macro Focus mode samples from the 7 Pro.

Low-light photos using the Night Sight mode on both phones are pretty much at par. You might notice subtle differences in brightness levels, but that’s about it. As Google claimed, clicking Night Sight shots is faster now, so you’ll spend less time trying to hold either of the two phones steady for these shots.

Only in the ultrawide images would you notice that the Pixel 7 Pro does a better job of Night Sight photography than the regular 7, and this may have to do with the difference in the FoV of the phones’ ultrawide cameras.

Unlike last year’s Google flagships, the Pixel 7 and 7 Pro feature the same selfie camera. This is a pleasant change for those looking to pick up the cheaper Pixel. Both phones click standard as well as portrait selfies with identical results.

We’ll also add comparative selfies from both phones in this article, but from the images here, you can tell that the two Pixels do a fantastic job of capturing color and making skin brightness appear natural. The advantages of Google’s Real Tone software are visible here.

What are your thoughts about the cameras on the Pixel 7 series? Take our poll below and drop us a line in the comments section.

What do you think about the cameras on the Pixel 7 series?

I think the Pixel 7 does a good enough job

I prefer the Pixel 7 Pro for the telephoto shooter

How to password-protect your PDFs