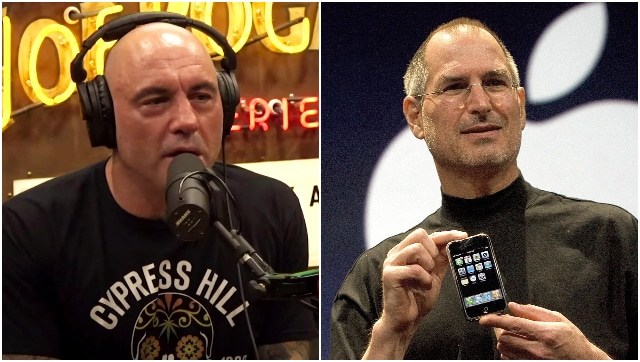 If you’ve been a fan of tech, and enjoy Joe Rogan’s podcasts, chances are you must have wondered what a podcast between Joe Rogan and legendary tech icon, Steve Jobs would have been like. Well, a Dubai-based tech company has come up with a rather cool answer for that very question.

An AI-based voice synthesis company based in Dubai called Play.ht has come up with a one-off, fictional podcast between Joe Rogan and Steve Jobs. The digitally created podcast uses realistic voices digitally cloned from both men from publicly available videos and other sources which have audio. The podcast between Jobs and Rogan was the first episode of a new podcast series called “Podcast.ai,” created by Play.ht, which sells voice synthesis services.

In the interview, you first hear a replication of Rogan’s voice created by voice cloning technology. Deep learning technology has allowed AI models to replicate distinctive voices with a high degree of accuracy, such as in the case of Darth Vader in Disney’s Obi-Wan Kenobi TV series.

Cloning Rogan’s voice was the easy bit –  after all there Rogan publishes a new podcast regularly, and there are plenty of voice samples for the systems to learn from. Cloning Steve Jobs’ voice, though was rather difficult. His voice was generated using Apple keynotes and All Things Digital interviews from the late 2000s. Because the source of the files that trained the AI model was old and not particularly of high quality, Steve Jobs’ voice was somewhat robotic and choppy at times.

As to generating what both of these characters would say during the interview, Play.ht claims that the text of the interview was generated by AI as well, possibly from a large language model similar to GPT-3.

“Transcripts are generated with fine-tuned language models,” writes Play.ht on the Podcast.ai website. “For example, the Steve Jobs episode was trained on his biography and all recordings of him we could find online so the AI could accurately bring him back to life.”

In the video, therefore, Jobs can be heard only talking about topics that have come to be known as his quintessential talking points – aesthetics, revolutionary products, competitors such as Google, Microsoft, and Adobe, and the triumphs of the original Macintosh.

It will be interesting to see if there’s any litigation because of this. While as an experiment, Rogan would sure appreciate the fact that his voice was digitally created, we’re pretty sure he wouldn’t approve of the fact that his voice was used to promote a product or a service, especially since he’s not getting paid. Jobs’ image, on the other hand, is very precious to Apple, a company that has been famously litigious for anyone using Jobs’ image without authorisation.

The ESG Contrast Between Michael Dell and Elon Musk