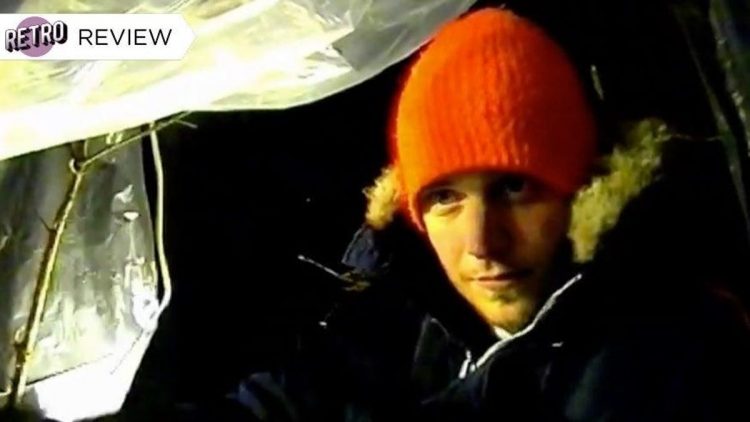 It makes perfect sense that Shudder is adding The Last Broadcast to its library. Last month’s V/H/S/99 was the streamer’s most-watched debut film, eclipsing a viewership record previously held by V/H/S/94. Clearly, audiences are still fiending for found-footage horror. Why not provide them with one of the original entries in the genre?

Released in 1998, The Last Broadcast—co-written and co-directed by Stefan Avalos and Lance Weile, who also co-star—is more of a mockumentary than a true found-footage film like The Blair Witch Project, which was developed concurrently but premiered a year later, or the V/H/S series. Shot on commercially available video equipment, the entire film cost less than a thousand dollars to make, and you can tell; even during the sit-down interview segments, the production values are extremely rough. And while other aspects of The Last Broadcast also haven’t aged very well—until its final moments, the whole thing feels sort of plodding and flat, rather than tense and propulsive the way true-crime tales are today—the movie’s ultimate message still feels eerily timely for something released nearly 25 years ago.

Ostensibly, The Last Broadcast is a documentary film made by David Leigh (David Beard), who solemnly addresses the audience at the start, explaining he’s trying to uncover the real story behind a trio of gruesome murders that occurred in New Jersey’s isolated Pine Barrens a year prior. The victims, all part of a goofy cable-access series titled Fact or Fiction, set out to investigate the legend of the Jersey Devil, with only one team member returning alive; he was swiftly charged with killing the other three, then died in prison after being convicted. The elements of the mystery come together with a 911 call, radio reports, TV newscasts, and newspaper clippings (one of which notes the importance of “the new medium called the internet” in the case), as well as an array of talking heads offering opinions and insights. And, of course, we get glimpses of Fact or Fiction’s grainy final footage, sloppily shot in the woods by guys who had no idea they were about to meet their doom.

But as The Last Broadcast progresses, it becomes more evident that David Leigh is less interested in discovering the truth about “the Jersey Devil murders”—which he also calls “murders of a high-tech age,” owing to factors like Fact or Fiction’s use of that newfangled Internet Relay Chat thing—and more fascinated with the way the crime was hurried into a tidy, almost universally accepted conclusion. The police looked at no other suspects other than the survivor, who was known to be a bit of a misfit and was seen behaving erratically in Fact or Fiction’s recovered footage. A carefully crafted edit of that footage was used in court to help seal his fate, something that Leigh returns to more than once while musing about how the case is ultimately “an indictment of truth and how it is viewed through the lens of the media,” and wondering if in fact “the Jersey Devil is the electronic image, the sound, the communication to the masses somehow twisted into a surrealist electronic world.”

In an era when The Real World had just started paving the way for reality TV’s eventual explosion, and YouTube, TikTok, Instagram, and other social media sites didn’t exist yet, Avalos and Weile presciently zeroed in on the idea of tinkering with images and perspective to present a curated, digitized version of the truth. That concept becomes meta once The Last Broadcast reveals the cards it’s been eagerly saving for its big last-act twist. Taken on its surface, the movie’s narrative isn’t particularly scary or even startling, and its themes, delivered through David Leigh’s portentous narration, are not as profound as they think they are. But there’s something about The Last Broadcast that almost feels prophetic, like it caught a moment in time when the internet was just starting to bleed into our brains—and teach us repeatedly to question who’s controlling the narrative, and just what their motivations, monstrous or otherwise, might be.

Want more io9 news? Check out when to expect the latest Marvel, Star Wars, and Star Trek releases, what’s next for the DC Universe on film and TV, and everything you need to know about James Cameron’s Avatar: The Way of Water.