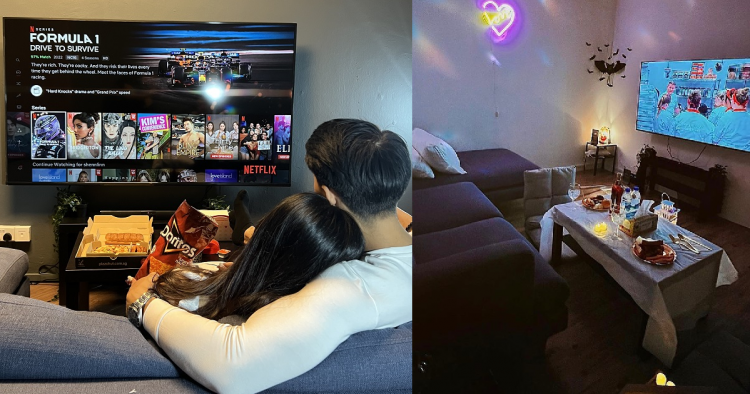 When your partner mentions ‘movie night’, what comes to mind? A casual dinner at a mall, before buying popcorn and snacks at a Golden Village outlet perhaps? Or maybe a night in with a home-cooked meal, streaming a movie on Netflix?

This is not the case for brothers Nigel and Don Leow, who are also the founders of Cozyplace. Started up in 2019 in the middle of the pandemic, it offers the ultimate movie experience for small groups or couples.

At first thought, the idea may seem quite strange. How would one go about matching either the cinematic experience of a movie theatre, or the comfort of a home for couples?

From man-cave to date spot

While the startup is primarily known for offering date spots for couples, it didn’t always start out that way.

My friend and I were hanging out in my office, and I casually mentioned that having a ‘man cave’ to chill out with friends would be a great idea. We began to discuss ideas on what the perfect ‘man cave’ would look like, and what it would take to have people come and book such a spot.

While this began as an innocent, off-hand discussion, the idea stuck and a month later, he had drawn up plans for the first iteration of Cozyplace.

Interestingly, this was not a concept for a date spot. Far from it, the idea targeted small groups of friends and offered them a place to game and chill, rather than a private movie-room experience.

This was before the worst of the pandemic, when groups of five were still permitted. Then in 2021, with cases surging, group sizes were further reduced and only groups of two were permitted according to Covid restrictions.

This was a huge wrench in Cozyplace’s plans, with rooms outfitted for larger groups that would not arrive. As such, Nigel decided that the company would need to change its focus to target young couples instead.

This is how the current iteration of Cozyplace was born. It is now a private space for couples to book, where they could enjoy the ultimate date experience.

Cozying up their space

Deciding on a business pivot is one thing; executing it is another thing entirely.

“Commercial rent is not cheap, and the initial rental deposit and renovation cost were daunting, especially for an unproven concept like Cozyplace,” recalls Nigel. Landlords were unwilling to rent to them, and preferred to wait for more established businesses to show interest.

Eventually, they managed to find a space in Jalan Besar where they could finally set up shop — but this was hardly the end of their troubles. According to Nigel, the public’s initial response to the idea of Cozyplace was underwhelming.

The concerns were, and are still valid, admits Nigel. But instead of taking it as mere criticism, he took it as genuine feedback to improve Cozyplace’s concept.

They significantly invested to spruce up each of the 10 rooms, furnishing it with a huge 1.7m-wide television for an immersive movie experience, couches, wall lighting, and most importantly, soundproofing.

Every room is outfitted with triple-layered walls and 100kg rockwool sound insulation to ensure sound proofing for an uninterrupted movie experience.

While Nigel and Don have declined to provide specific figures for how much he has invested so far, the business is apparently already close to breaking even.

The redefinition of Cozyplace from a man cave to date spot didn’t end there. As demand picked up for their private cinematic experience, Nigel began to receive requests for more variety in Cozyplace. Suggestions for themed rooms, including different lighting styles and food offerings, began to flood in.

Currently, Cozyplace offers several different options to choose from: the standard cinematic experience, an option for a dinner and movie date, a K-drama romance experience, or a romantic starry night experience.

Encouraged by its success thus far, Cozyplace has plans to actually expand and open a second outlet near Bugis and Bencoolen MRT, and next to the Nanyang Academy of Fine Arts.

The new outlet will have eight more private movie rooms and will feature similar themes as their current Jalan Besar outlet. It is scheduled to be launched by the end of this month.

While almost everyone has a story about companies that allow standards to drop when they expand, Don and Nigel are promising that there will be no such slide.

For Don and Nigel, the concept of being romantic does not necessarily have to equate to fancy things like expensive jewellery and fine-dining restaurants. Instead, they see the idea of romantic as being simple and comforting.

Even a ‘home date night’ can be improved upon, and the brothers seem to have found a way to do just that.