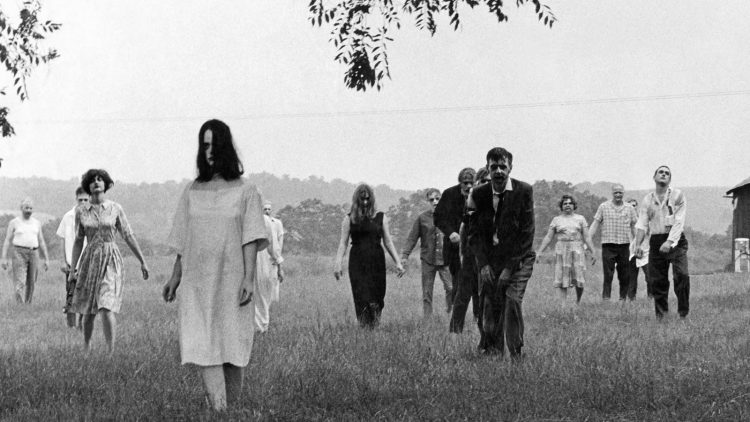 For many people, the zombie is perhaps the scariest monster of all. It used to be a living human being that’s now dead, but still walking and wanting to bite down hard on anything living. The movie versions, first created by George A. Romero in Night of the Living Dead, are what most people think of when they think of zombies. But what are the best zombie movies to watch during Halloween season, or any season for that matter?

Believe it or not, it’s actually hard to pick the best ones, but we managed to cut down our list to the top 10, with a few extra honorable mentions. Here are our choices for the best zombie movies to stream. One thing we will mention up front: the original 1978 version of George A. Romero’s Dawn of the Dead is currently not available to stream or to rent or purchase in a digital format due to licensing restrictions. Otherwise, it would definitely be on this list.

While there were movies released before 1968 that had some kind of undead monster, co-writer and director George A. Romero came up with what most people identify as a zombie with this independent film. Set in southwestern Pennsylvania, it focuses on a small group of people who are trying to keep the undead from coming inside a small farm house. The movie even has a quasi-scientific reason for the rise of the dead. There are still some pretty scary moments in this black-and-white film, and the ending isn’t exactly an uplifting one. (Fun fact: the word “zombie” is never mentioned in the film, which is something that the TV show The Walking Dead doesn’t mention as well). There was a color remake of the movie in the 1990s, but it’s not nearly as scary.

Day of the Dead

Romero made several zombie movies after the original Night of the Living Dead.  Since the best one of the sequels, the original 1978 version of Dawn of the Dead, is not available to purchase or stream digitally, you will have to do with his third film Day of the Dead. It’s still a good movie, set sometime later in Romero’s zombie apocalypse. Some of the last remaining humans are in an underground bunker and are trying to cure this zombie plague, or at least train them so they won’t bite on humans. The conflict between science and the military is an old one but it’s put to good use in this film.

Return of the Living Dead

The co-writer of Night of the Living Dead, John A. Russo, is credited with co-writing the story for this 1985 movie. However, the final script was written by its director Dan O’Bannon and it takes a comedic tone to the material, as a group of ordinary folks has to deal with the undead after a chemical spill reanimates the corpses in a cemetery. The makeup effects are both scary and funny. Oh, and this is the first zombie movie to show that the undead prefers to eat human “brainnnsss”.

Long before he started making Lord of the Rings and Hobbit films, Peter Jackson directed low budget horror flicks in New Zealand. This movie (also known as Braindead) is from 1993 and is about a boy and his mother. The boy finds a girlfriend, but the mother finds a rabid monkey that turns her into a zombie. It has some comedic elements to it, but the movie is also full of some very gory makeup effects as well.

Yes, yes, we know. This is not “technically” a zombie movie, but the infected people with this “rage virus” certainly act like zombies. The movie, directed by Danny Boyle, mostly shows the post-infection results of this virus four weeks after the first outbreak. Cillian Murphy plays the lead character, a man who wakes from a coma to find London almost completely deserted, except for a few remaining uninfected humans and tons of rage virus victims who want to spill their blood on them. The movie uses some shakycam footage at times to solid effect, and for once the movie has a semi-hopeful ending. A sequel, 28 Weeks Later, is nearly as good as the original.

Shawn of the Dead

Director Edgar Wright and co-writer and star Simon Pegg may have made the perfect zombie comedy. All Pegg’s character Shawn wants to do is go to the pub every night, get drunk, and play video games, but his girlfriend decides she wants to break it off with him after too many missed dates. Unfortunately, the breakup happens just before the zombie apocalypse hits, and now Shawn must rescue his girlfriend, his mom, and his remaining friends. Wright and Pegg clearly love Romero’s zombieverse, and we think this movie would fit right into those older films, even with the comedic element.

Remakes are almost never as good as the original, so it’s very unusual to have one on this list. Director Zack Snyder (in his feature debut) and screenwriter James Gunn (who later directed the Guardians of the Galaxy movies) took the basic premise of the original George Romero picture (people trapped in a mall surrounded by zombies) and basically turned it into a full-fledged action film, thanks to the decision to use fast-moving undead attackers. It’s faced paced, funny in places, and like many films on this best zombie movies list, doesn’t have the happiest of endings.

Here’s another full-fledged zombie comedy film that is on our list. It’s also one of the few that has some major acting star power. Jesse Eisenberg, Woody Harrelson, Emma Stone, and Abigail Breslin’s characters all meet each other on the road a few months after a zombie apocalypse and try to keep moving and stay alive as they cross America. The film does make some fun out of the typical zombie movie tropes and has one of the better surprise cameos in movie history. A sequel, Zombieland: Double Tap, reunited the main cast but isn’t quite as good.

The highest-budgeted zombie movie of all time also has one of the biggest box office stars, Brad Pitt, in its leading role. He’s a former US troubleshooter who is now just a family man. When a fast-moving zombie outbreak suddenly hits the globe, he goes back to his old UN job to travel around the world to try to find a cure. The sequences where the zombie hordes literally create living ladders to get over walls are impressive, but the movie’s final third, where Pitt’s character tests a possible solution, is even more tense and terrifying. One word of warning: if you read the book this movie is based on, don’t look for too many similarities.

Leave it to a South Korean filmmaker to devise a zombie movie that’s both entertaining and still different from the crowd. This 2016 movie is all about family, as a father tries to reconnect and later protect his daughter on a speeding train to Busan. This train, however, is filling up with zombies. This film has some cool chase sequences with the fast-moving undead, and the end might get you to actually cry. There’s a sequel to this movie you can check out if you want, Peninsula, but it’s mostly about action and not as much emotion.