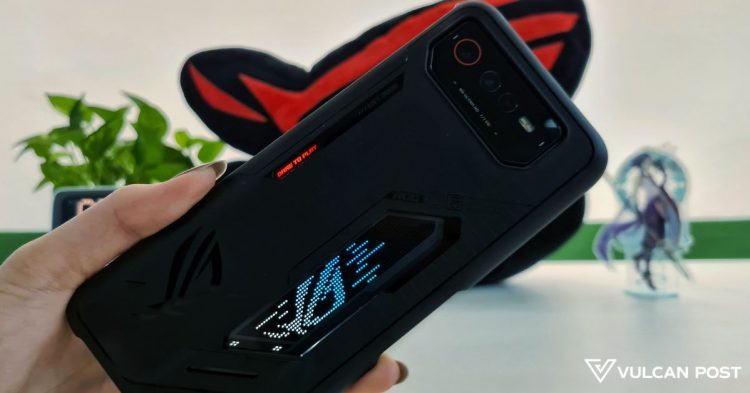 I remember the day I first set my hands on the ASUS ROG Phone 6 at an exclusive media invite.

It was my first time ever seeing a gaming phone in person (this was before I even reviewed the REDMAGIC 7S Pro), and my first thought was, “Wow, this totally wasn’t what I expected.”

Having seen pictures in the past of gaming phones from all kinds of brands, I’ve always thought they looked rather tacky and cheap, too loud and shameless for one to use anywhere else than in the privacy of their own bedroom.

They were a statement in and of themselves, and I could never see myself using any of them as a daily driver. Imagine pulling out your loud gaming phone for a call while at a business networking event? I’d faint.

The REDMAGIC 7S Pro changed my mind on that quite a bit, as I liked how it toned down on the loudness, but still packed a punch as a solid gaming phone.

If I were to be honest though, the ASUS ROG Phone 6 has a similar vibe while looking much more polished and, dare I say, beautiful?

Excellent gaming performance isn’t a game to it

Compared to its pricier Pro variant, the ROG Phone 6 is admittedly less cool-looking, but it’s still sleek in its own way.

Available in Phantom Black and Storm White, its polished back is given a slightly rugged look with intercepting lines and statements in blocky fonts.

Don’t get me wrong though, as despite what I said about it being more toned down for a gaming phone, it is still unmistakably a gaming phone at first glance.

Statements like “Republic of Gamers” and “For Those Who Dare” printed on the phone’s Corning Gorilla Glass 3 back only serve to reinforce its nature.

The loudest element of all on its back is probably the RGB matrix display, which can be customised for an expression of one’s current mood, and to inform you of specific notifications.

I quite like that the camera housing takes up minimal space, keeping the lenses horizontally linear and out of my way when gaming in landscape mode. This meant that I was less likely to get fingerprints all over the cameras.

With its high-end specs such as a 4nm Qualcomm SM8475 Snapdragon 8+ Gen 1 chipset and an AMOLED HDR10+ display, to name a few, it’s no surprise that gaming on the ROG Phone 6 is comfortable.

The 165Hz is among the highest refresh rate available in the local gaming smartphone market too, but I’ll admit that it’s a little overkill for most games, fast-paced combat ones like PUBG Mobile and Apex Legends included.

To no one’s surprise, playing Genshin Impact was a pleasurable experience, with fast loading times (comparable to those when I’m playing on my gaming laptop) and practically no lag, even on the highest graphics settings.

The Armoury Crate app found on the ROG Phone 6 is where I could tinker around with settings for an optimal gaming experience, such as deciding power allocation to certain features, turning off distracting phone notifications, and more.

There are three different modes in the app to choose from: X Mode, Dynamic, and Ultra durable (Eco).

When in-game, swiping diagonally down from the top left of the screen will bring up a minimised version of the Armoury Crate so you can efficiently toggle settings.

I found this useful for switching around my touch and button mapping using the AirTrigger 6 feature. The AirTriggers allowed me to expand my controls in-game and find more comfortable, faster ways to do certain actions.

Hardcore gamers will be pleased to hear that you can map out 14 customisable touch points on the screen simultaneously across the 6.78-inch screen.

Although, the additional touch sensors on the back of the phone like on the ROG Phone 5s have been removed.

I no longer play idle games, but there’s a Macro recording function that will benefit those who do. Once activated through the Armoury Crate, it will record your actions and mimic them, basically doing the gaming for you.

When gaming in landscape, the ergonomic centre charging port along the length of the phone ensures that you can juice up without interrupting gameplay.

Otherwise, there’s another charging port along the short edge of the phone. Wireless charging is not available.

When using the phone for regular use and a good few hours of gaming each day, battery consumption didn’t seem like anything to worry about.

Of course, when used in X Mode with the refresh rate turned all the way up to 165Hz, I did see the battery life dipping a little faster.

Those who want to take their gaming to the next level have a myriad of add-on accessories for the ROG Phone 6 series to choose from, such as the new AeroActive Cooler 6, a docking station, attachable controllers, and more.

The phone’s build is nice in size and weight with a sturdy feel to it, but it’s rather slippery to hold, let alone game with. A case would do you good, though you might then notice a bit more heat build-up with it.

While the ROG Phone 6 is a gaming phone first and foremost, and one that excels at what it’s meant to do, its high-end specs pretty much make it a good daily driver too.

One area of compromise in gaming phones might often be their cameras, but even in this department, the ROG Phone 6 doesn’t disappoint.

Pictures come out pretty clear and balanced, but I’m not enough of an expert in phone photography to be to particular over details.

Our video team has been actively using it to record their Instagram Reels though, so I guess that speaks for itself.

VP Verdict is a series where we personally try and test out products, services, fads, and apps. Want to suggest something else for us to try? Leave a comment here or send the suggestion to our Facebook page.