Peak Android but only one storage variant- Technology News, Firstpost 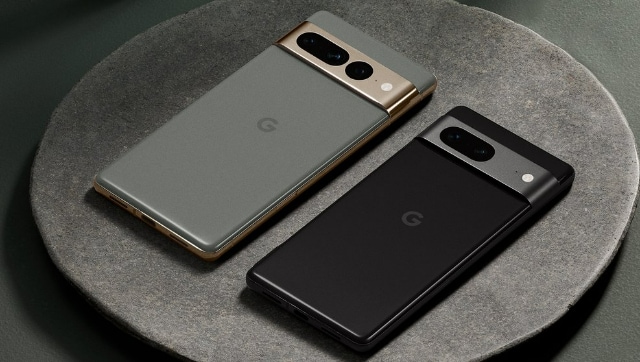 This has been a big year for Google smartphone fans in India — the tech giant first released the very capable Pixel 6a (review) in July and, barely three months later, released its next-generation flagship phones — the Pixel 7 and the 7 Pro — powered by Google’s in-house second-generation G2 Tensor chips.

We had both smartphones for just under two weeks, and here are our thoughts.

It is very clear right from the outset just how similar the 7 and 7 Pro are to their predecessors — barring a few physical changes, such as the camera housing which is made of metal this time instead of glass. The Pixel 7 is slightly smaller than the 6, and sports a 6.3-inch screen, while the Pixel 7 Pro has similar dimensions to the Pixel 6 Pro, but instead of the sharply-curved screen of last year’s flagship, the curve is less pronounced this time.

We can’t help but feel that this is what Google intended for the Pixel 6 and 6 Pro to be — the new smartphones are more a refinement of last year’s lineup than a radical new upgrade. That said, it is odd that Google offers both phones in just one storage variant — 128GB — leaving potential buyers who need more storage with no choice but to look at other brands.

But even prettier is the Hazel 7 Pro — the olive green of the back is brilliantly complemented by the polished gold aluminium frame and looks every inch a flagship.

Now that the looks are out of the way, how do the phones perform?

As with every smartphone, we tested five aspects — screen, camera, battery life, user experience and software, the last two of which have significant overlap.

Screen
The Pixel 7 has a 6.3-inch full HD flat display that’s absolutely gorgeous to look at, though one could argue that a sharper resolution could not have hurt. The colours are accurately reproduced on the screen, videos are rendered well, and we were able to view the screen’s contents in bright daylight without too much trouble.

The Pixel 7 Pro predictably kicks things up a notch. The 6.7-inch display is a stunner, and at peak brightness, absolutely sails through any lighting condition. Overall, it is a superior display to its smaller sibling.

Battery life
This was the most impressive part about both these phones. Both handsets easily lasted me a day of moderate-to-heavy use, with the 7 Pro crossing the 40-hour mark before it died on me. The Pixel 7 just made it to 27 hours before it needed charging— colour me impressed.

Your mileage obviously will vary but not by too much. Google has been knocking it out of the park with the battery life on its phones this year — the Pixel 6a too held up quite well during testing.

Both phones support wireless charging and reverse charging, so imagine the kick we got out of wirelessly charging the Pixel 7 using the battery share feature on the 7 Pro, which effectively turned the Rs 85,000 flagship phone into a wireless charger.

Camera
Now we come to the meat of this review. The cameras have always been the standout feature of Pixel devices, and the 7 and 7 Pro do not disappoint. Though we spent most of our time testing the beefier camera setup on the 7 Pro, we can attest that the 7 is no slouch. In fact, for reasons we will list out later in the review, the 7 is a better package overall.

So, how did the 7 Pro do? The phone comes with a triple-lens camera array. Of course, we played with the setup quite a bit. More than the physical specifications, it’s always Google’s computational prowess that stood out. And, even on a cloudy morning, the camera took some impressive photographs. The colours are saturated just right, with all three lenses — primary, ultrawide and telephoto — maintaining colour consistency while capturing the same subject.

The yellow is perfectly set off against the green foliage, though the primary shooter struggled a little with the dynamic range. (Image: Vijay Anand | CNBCTV18)

This, for our money, is a stunner at 10x optical zoom — the lens captures an impressive amount of detail without oversharpening the image. (Image: Vijay Anand | CNBCTV18)

The camera has other fun features, such as 360-degree photographs (which would be impossible to reproduce here), fisheye mode, wide-angle, vertical and horizontal ‘Photo Sphere’ modes.

Also making its debut this year is the cinematic video mode, but the 7 Pro is a little too aggressive on the blur effect, making the final video feel a teensy bit artificial. Apple didn’t hit the target either on its first attempt at cinematic video capture on the 13 series last year but refined it on the 14 series. Expect Google to do no different in the 2023 lineup.

Overall, using the camera app is super fun with all the different modes, and the results are reliable, making for a smooth photography experience.

User experience and software
This is where Google absolutely crushes it. Google is the most natural bet to take on Apple by virtue of it making the operating system (Android) and hardware (Pixel phones). The company’s strategy, however, has wavered in previous years with some truly puzzling decisions, such as not bringing any flagship phones to India for a couple of years.

But with the Pixel 7 and 7 Pro, the company is slowly catching up to the iPhone maker. For the first time in many years, the hardware and software designs are absolutely in sync, and that makes for a delightful experience.

That is not to say it’s all smooth sailing — there are a few rough edges. The odd bug pops up to ever-so-slightly mar the experience, but overall, it’s refined, well-packaged and more importantly, smooth as butter.

Android 13 runs like a charm on these devices and Google’s special touches, such as live captions and live transcribe, have made our life as journalists that much easier. I’ll admit it — the Pixel experience is, for our money, one that is very practical and extremely useful.

In conclusion
The Pixel 7, thanks to its compact size, matte aluminium side rails and lower asking price, is the better value of these two devices, but the 7 Pro is definitely more eye-catching. If you can spare the extra Rs 25,000 and absolutely need the larger screen size and that extra camera, go for the Pixel 7 Pro.

But if you want a bang-for-buck, quintessential Pixel experience in a delightful little package, buy the Pixel 7. Either way, at least from our experience, you can’t go wrong.