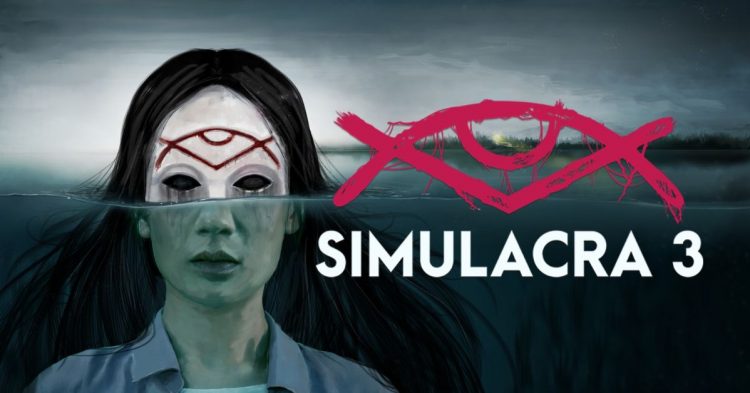 Played by the likes of Jacksepticeye and Markiplier, the highly anticipated SIMULACRA series returns with its third chapter, SIMULACRA 3.

This time around, we’re an intern at a local paper, tasked to figure out the truth behind all the disappearances happening in Stonecreek. Armed with nothing but a bizarre phone as our clue, we must work with a headstrong journalist to put the pieces together before it’s too late.

If this sounds like your kind of game, do be aware that there are spoilers up ahead in this review.

Stonecreek faces a problem that many other towns have faced before or will likely face in the future. No, not disappearances, but gentrification.

Of course, the disappearing townspeople are a cause for concern too, especially with how they’re vanishing into thin air, only leaving behind an eerie symbol that resembles the shape of an eye.

Restless and terrified over these unsolved disappearances, rumours that this is all the doing of the Beldam, the ghost of a witch that supposedly haunts Stonecreek, begin to draw the townsfolk’s attention.

Here to quell those rumours is Ruby Myers, the town’s star journalist who takes her job very, very seriously.

Ruby’s confident that the answers lie somewhere in our only lead—the phone of one Paul Castillo, a software developer by day and an amateur historian (and conspiracy theorist) by night.

The possible endings you can get

While Ruby’s out on the field, our job is to rack through Paul’s phone for clues, which isn’t as easy as it sounds. As a safeguard, Paul has equipped his phone with a bunch of security measures.

To get those clues we so desperately need, we must play by his rules, which include solving puzzles, messaging people of interest, and downloading random video files off the internet.

The game comes with 11 different endings, so the player’s choices do matter—albeit not until toward the end.

The lore deepens… for those who read

If it isn’t clear, the Beldam is the main antagonist and the starred simulacrum of this instalment. From its name to its figure, this seems to draw inspiration from the Other Mother, the spooky villain of the animated feature film Coraline.

While interesting, the backstory for the Beldam is pretty straightforward. The premise and formula of the game are reminiscent of previous titles in the series, which some may appreciate for consistency’s sake.

However, for those who are willing to take the time to do so, there’s definitely a lot more to explore beneath the surface. From the various audio tapes to the countless posts found on Atlas, which is essentially a town forum, the worldbuilding is robust for those who look for it.

The dedication the developers put in coming up with these posts is definitely to be commended. They’re realistic (i.e. some are quite mundane and silly), and the witty comments left by other users can be rather amusing. Funnily, we can post comments ourselves too (yes, with expletives and all), though you won’t get a response back.

There’s also much to read on the websites we have access to, from news clippings of the happenings in Stonecreek to blog entries about local lore.

While quite similar to previous titles, there are a few new features that bring SIMULACRA 3 to the next level, at least in terms of gameplay.

For instance, players will get to see their actions play out in real time. Quick reaction times are definitely needed during video calls, which adds to the exhilaration.

However, the most fascinating part of the game is probably when we’re directing Ruby through Paul’s home, which the Beldam has infiltrated.

Thanks to the phone in our hands, we’re able to access Paul’s security cameras and even control certain home appliances to distract the Simulacra. By doing so, we can safely help Ruby escape.

Ruby speaking to us via video chat (left), Paul in a video recording of himself (right)

As a concept, it is reminiscent of Five Nights at Freddy’s, though a little less scary. The stakes feel high in this portion of the game, though I’m not quite sure what would happen if we accidentally make a wrong move. Would Ruby really die so early on in the game?

Well, only a second playthrough would tell.

Overall, SIMULACRA 3 was a fairly engaging and interesting game that took around four and a half hours to complete.

With that said, I’m not as familiar with the first game of the series, but I personally prefer SIMULACRA 2’s plot, characters, and the Simulacrum itself. Many other reviewers on Steam also seem to prefer the previous games by Kaigan Games, something that may be exacerbated due to high expectations.

I also wish the game was a little spookier. For instance, while scrolling through Atlas, perhaps a jump-scare could pop up. Or, maybe the “eye” could periodically appear on our phone to daze the player for a few moments. Paired with some eerie whispers, this would leave me properly spooked.

However, the gameplay of this third chapter felt more engaging to me. Down the road, I feel like the developers could also continue to explore the found phone format to include more immersive experiences.

Regardless, I enjoyed exploring Kaigan Games’ take on the “small town versus big corporation” trope and once again solving the mystery presented before us.  I’m certainly interested in replaying the game again to explore the other endings.