Shows like The White Lotus: 9 titles to stream next 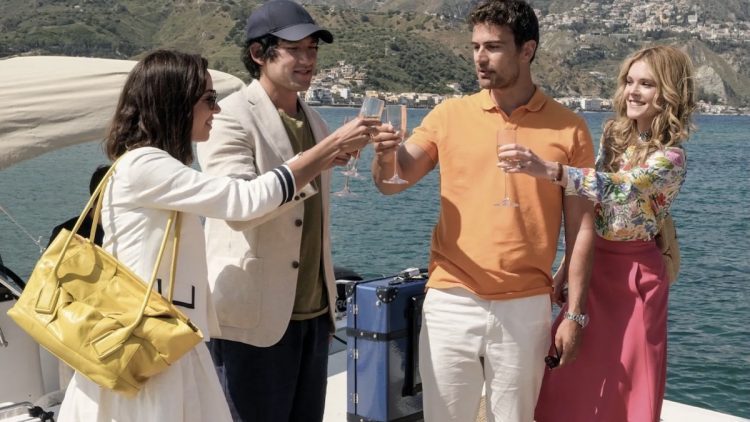 The 2021 HBO miniseries The White Lotus was such a hit that the premium cable network greenlit a second season, which is now airing. Or, you can stream it on HBO Max, along with season one. As you wait for new episodes, you may be looking for other shows like The White Lotus to stream. We’ve got you covered.

See also: What to watch on HBO Max

Read on for more titles about entitled rich people, mysterious deaths, and luxury resorts. You can watch The White Lotus on HBO Max by hitting the link below.

A kind of cross between The White Lotus and The Expanse, Avenue 5 is a hilarious HBO Comedy set in space. When a luxury space cruise liner owned by a hapless billionaire is knocked off course, the ship’s staff and a team on Earth have to figure out how to get it back on schedule and home safely before the passengers revolt.

Premiering soon after the first season of The White Lotus, Hulu’s Nine Perfect Strangers was immediately compared to the HBO hit. Based on the mystery novel by Big Little Lies author Liane Moriarty, the miniseries follows nine strangers invited to an exclusive health-and-wellness resort that promises to heal and transform them. But they soon realize they may have been brought together for other reasons.

Hulu offers not only thousands of movies and TV shows to stream, it also has original shows and films like The Handmaid’s Tale. You can upgrade to Hulu Plus Live TV to get live channels, including your local stations.

Another hit HBO show, Succession is not entirely a show like The White Lotus, but it shares one important feature: terrible rich people behaving badly. The series follows the children of a media mogul vying for their father’s affection and hoping to take over the family business when he retires.

For more glamorous rich people in beautiful locations, you’ll want another HBO series, this one much lighter on the comedy than The White Lotus. In Big Little Lies, we follow a group of women in Monterey County, California. As they live their lives, dealing with relationships, abuse, parenting, and more, we know that they’re all hurtling towards a major, traumatic event, putting the pieces together all the way to the explosive finale.

One of the best and most underrated shows on HBO, The Righteous Gemstones is a hilarious family comedy. The Gemstones are a televangelist dynasty. As their father gets older, the three Gemstone offspring fight over power of the church, hoping to earn their father’s trust and respect.

In Canadian sitcom Schitt’s Creek, a wealthy family is reduced to the clothes on their backs in a single moment thanks to a business partner’s shady dealings. Well, not just the clothes on their backs. Years earlier, they purchased a town with a funny name, and now it’s all they have left. Can they start over as fish-out-of-water in the town of Schitt’s Creek? And will the town make room for them?

Blending dark humor and immense privilege, Netflix’s The Politician is a great choice for anyone looking for a show like The White Lotus. Ben Platt stars as a high schooler who has always known he was destined for a life in politics. He dreams of being President of the United States. He also has a detailed plan to get there. His first challenge is winning the class presidency to get into Harvard. But that will mean duking it out with classmates while maintaining his carefully crafted public image.

After her recent divorce leaves her holding an $87 billion settlement, Molly Novak decides it’s time to re-enter the “real” world after years in a bubble of privilege. She reengages with her charitable foundation, taking a more active role with some unexpected results in this comedy series on Apple TV Plus.

Apple TV Plus has quickly become a major player in the streaming game since its launch in 2019. Its slate of original programming includes shows like Ted Lasso, The Morning Show, Foundation, and For All Mankind as well as movies like The Banker, Greyhound, and Palmer.

Another series about people at a resort dealing with their personal issues, steeped in foreboding, The Resort is one of the best shows like The White Lotus. A couple celebrating their 10-year anniversary in paradise aren’t on the same page, but they’re working through it. That all becomes a lot harder when they’re pulled into a 15-year-old mystery surrounding two missing people.

Those are just a few shows like The White Lotus to check out in between episodes or once you’re all caught up on season 2.