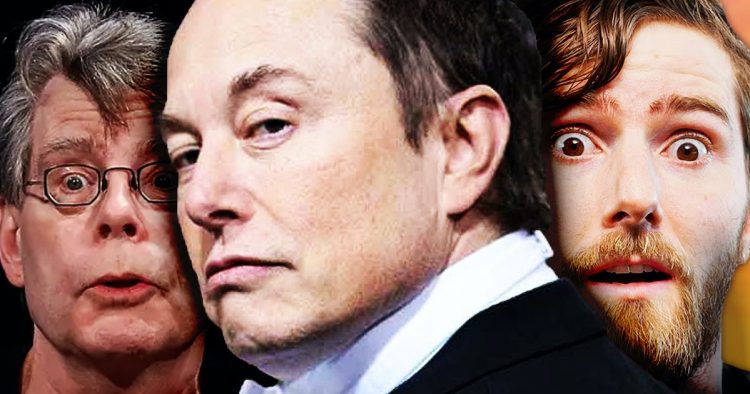 I must say that Twitter has now become one of the funniest places on the web, particularly given the frenzy of the week before American midterm elections.

The paranoia in some corners of the site, coupled with the impending demise of a privileged status held by many “blue checkmarks” who, thus far, have carried it as a badge of honour and authority (as if spewing 280-character comments on topics you’re most emotionally biased about was some sort of lifetime accomplishment), is really a sight to behold.

One would almost think the world is about to end.

Elon Musk has added fuel to the fire floating the notion that not only identity verification would now be open to everyone (not just certain “influencers” or outlets posting, ultimately, whatever they please) — but that it would come at a price of US$20 per month, prompting cries of horror, chiefly among those who enjoyed their status free of charge.

$20 a month to keep my blue check? Fuck that, they should pay me. If that gets instituted, I’m gone like Enron.

I think it’s pretty ludicrous that a millionaire writer can’t cough up US$20 per month to support existence of a platform that allows him to communicate with seven million of his followers.

Don’t get me wrong, he has obviously been extremely successful and earned his place in the global culture — but he is not someone you would call “essential”, now would you?

He writes gory fiction, known for i.a. brutal scenes of sexual abuse, which has caught on well enough to be made into films. Very well, congratulations — but why would that entitle him to special treatment from others providing valuable services?

Ultimately, Musk settled for US$8, though even that did not quell the uproar among particularly more progressive Twitterati, despite the fact that the site will remain free for everyone and the expanded Twitter Blue service (which already exists as a limited US$5 subscription in selected markets) will come with a handful of perks.

Twitter’s current lords & peasants system for who has or doesn’t have a blue checkmark is bullshit.

Power to the people! Blue for $8/month.

The chief goal, however, appears to be combating spam and bot activity.

I’m not a robot

We’re all familiar with this Captcha box that is supposed to confirm that we are, indeed, human beings and not bots flooding the site we’re about to enter with fake traffic, comments or spammy email messages.

Well, in the world of Musk’s Twitter, this would be replaced with your credit card.

Out of all the benefits listed above the key one is a degree of priority given to all subscribers to the site as their identities are confirmed by the sheer fact of having paid the fee.

Spam accounts will have it much harder to reach real users if they are throttled on the basis of non-payment for the privileges. And paying is hardly even an option for scammers, since for instance, 1,000 fake accounts would be a US$8000 monthly operation and they would actually have to provide a sufficient diversity of payment sources to fund them, which would render it even less likely.

As it is, even as I write these words, I have dozens of messages in my Twitter inbox, promoting all sorts of rubbish, from part-time jobs to crypto. My Facebook Messenger, on the other hand, is full of bots looking for a “friend”, typically with a doctored photo of a seemingly attractive lady.

(That is, of course, in addition to misleading comments that keep popping up on pages every day, either trying to get you to add them to their network or head somewhere else for “life-changing” advice.)

This can be curbed — if not entirely defeated — by reserving some functions of the site to paying customers only.

Fundamentally, interaction between subscribers will become far more trustworthy than today. The currently special status of a “verified” user would not longer be limited to those deemed to be “important” enough (and not necessarily any more trustworthy or accurate in what they write).

Those who refuse or are unable to pay (though Musk promises adjustments reflecting purchasing power in different countries, to keep it relatively equally affordable everywhere) are not going to be blocked from the site. They will just not get the special treatment.

But that is not all — there’s also another benefit of paying for a social media platform: more money to interesting content creators.

Every platform on the web lives not only (and not even largely) by itself, but by the work of valuable contributors on it. Take YouTube as an example — the only reason it exists are videos that people upload on it for consumption by others.

YouTube itself has already introduced Premium paid service worldwide, which provides an ad-free experience to users, while the site shares the money it collects with YouTubers on the basis of views and watch time of their videos.

I often hear people complaining how they should get a raise, or have better working conditions, more holidays or work from home, and how their bosses or the government should guarantee it for them.

And then the very same individuals complain that restaurants are expensive, that public transit costs more, or that you have to pay extra for Netflix or get a YouTube subscription to skip ads.

In other words, many like to expect everything will be done for them, but they themselves don’t really care about everybody around, who is also hard at work.

One of the most surprising comments, illustrating the problem, came from the creator of a popular tech YouTube channel, Linus Tech Tips, Linus Sebastian:

When blue checkmarks cost $20, you’ll be able to tell this is the real me because I still won’t have one ?

I don’t like paying for blue checkmarks, so I’m gonna not give them my money.

It’s an example of how something can be both rich and cheap at the same time.

Rich coming from a guy peddling fan gear in every video, plugs sponsors for each piece of content, runs separate paid subscription on YouTube and his own streaming site where he expects you to pay US$10 for 4k footage that didn’t make it to the final cut of LTT’s videos — and cheap because, well, it’s cheap isn’t it?

A millionaire content creator, who is little more than an entertainer, entirely dependent on online service providers thought it would be a good idea to make some sort of a stand by publicly stating he won’t pay 20 bucks for a blue checkmark on one of the largest sites on the planet? What sort of twisted virtue-signalling is that?

Well, if you don’t want to, nobody is forcing you — least of all Elon Musk.

But why make a statement about it as if it was a bad thing that a site known for years of financial underperformance (Twitter has been running losses for most of its existence) would finally like to make some cash under new, private ownership? Just like *gasp!*, your own company wants to!

Don’t be like Linus — don’t be cheap, cough up the few bucks to enjoy a better experience — and better content and service, as its creators are able to pay bills, employ more people, grow their companies and provide you with more of what you profess to like.

Internet of the future?

People love to complain about how the Internet is flooded with ads, how there are scams on each corner and spam filling our inboxes — but how many realise it it’s because of them?

Because of us, all of us as users?

We can defeat spam and even get rid of pesky, misleading ads that publishers and advertisers alike are desperately trying to trick us into clicking. We just have to agree to pay for the services rendered online.

We’re sinking hundreds of dollars into Starbucks, or nightlife, or another shiny tech gadget but won’t forgo one of them to pay a subscription fee for a useful or fun service on the web?

I’m happily paying for YouTube to get a good experience and no ads. I will jump on Twitter Blue when it becomes available, because it should make using it more pleasant, more functional. Heck, I would even pay for Facebook, if only to get rid of those annoying ads disrupting even the shortest videos these days.

Thousands of people are employed by these companies and they have to put meat on the table — just like I do, just like everybody else does.

Economy is a system dependent on reciprocity of people paying each other for valuable services.

How much better would it be if we weren’t bothered by spam everywhere? By bots flooding comments on social media and content sites alike, trying to get us to click some misleading link or sign up to the next best get rich quick scheme?

If we weren’t tracked wherever we go online, just so Google or Facebook can then serve us another “targeted” ad?

The only way for us to do it is to price the unwanted behaviors out.

If site owners can make enough money by providing good content, products or digital services, they won’t have to resort to scraping every cent possible out of advertising space and on-site engagement could be limited to now large enough groups of loyal members, no longer bothered by bots.

Our privacy would be less compromised, if we weren’t tracked all the time — on mobile and desktop — just because some desperate business owner is trying to make a buck for whatever it is he’s doing online.

Financial barriers of entry need not be high for our experience (and security) on the Internet to receive a massive boost.

We just have to ditch our deeply ingrained entitlement to how “free” things are on the web. When they even aren’t, since when you’re not paying for a product, you become the product sold by the sites or apps you use, without even realising it.

If we don’t fundamentally change our mindsets and accept that a good/enhanced service deserves some payment (even relatively), we will never grow out of the state the internet is still in.