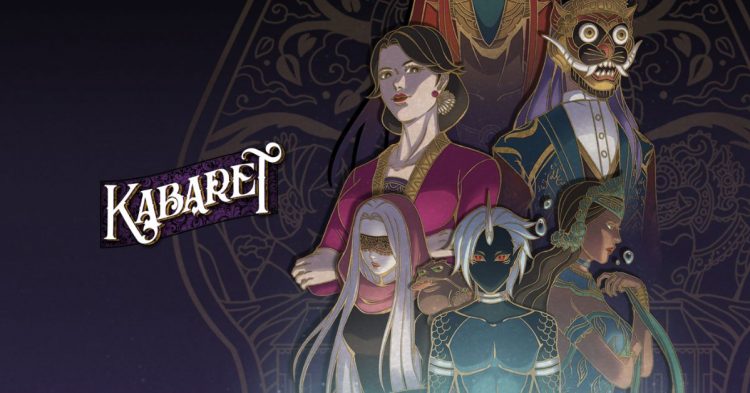 Malaysians who grew up on games like congkak and tales of the Pontianak will get to revisit them in Kabaret, albeit in a different kind of context.

An upcoming dark fantasy game created by Persona Theory Games, a Malaysian indie studio with a focus on narrative games, Kabaret is filled with folkloric monsters of Southeast Asia and a vocabulary that occasionally borrows from our national tongue.

A demo of the indie title has been available for a while now on Steam, but we were recently sent an unreleased demo of the game that was showcased at MDEC’s Level Up KL too. After playing both, here’s what was teased about the world of Kabaret.

Fancy a cup of tea?

We awake in a sampan as Jebat, a cursed and not-so-human-anymore boy who’s just been plucked off Penang and thrust right into the monster realm also known as the Alam.

Rowing the boat is a man—nay, a creature—with a masked face resembling a tiger. He introduces himself as the Caretaker, a Harimau Jadian or Weretiger from Malay folklore.

The Caretaker is the owner of Kabaret, where various Southeast Asian creatures including ghosts, monsters, and more, dwell, and soon, Jebat’s new home too.

After encountering Ekek, a winged bird-like creature from Philippine mythology, we learn the ways of tasseomancy, a divination method that interprets patterns in tea leaves.

By offering this service to dwellers of the Kabaret, Jebat will be able to gather information on how to break his curse and regain his human self.

The ceremonies also act as a natural way for the story to progress, as Jebat gets to meet new people and help them navigate their troubles.

In the unreleased demo, the tea ceremony feature has been updated to be much more interactive, allowing Jebat/the player to make more choices in terms of tea leaves and additional ingredients. This keeps things much more interesting and makes fuller use of the game medium.

There are more options now, and the player must make tea that abides by the customer’s wishes

Rooted by an engaging premise and storyline, the game makes heavy use of imagery and audio to really create an immersive experience and build the ambience.

In the original demo, characters come with a set of recurring voice lines, or rather sound lines that play every time they speak.

For instance, Jebat repeated lines that sounded like some kind of foreign tongue, while the Caretaker had a distinctive series of roars and growls.

While interesting, the sounds started to become a bit repetitive to me. Interestingly, the team actually removed this feature in the new demo.

Most impressive about the audio to me is the soundtrack, which was created by SambaSunda Indonesia, an Indonesian ethnic music fusion group based in Bandung. Meanwhile, the music and sound effects are by Hello Universe.

Particularly memorable was the song playing over the opening credits of the new demo. Further amplifying the breathtaking art, the singer’s sweet, crooning voice over the ballade instrumental sent goosebumps up my arms.

There’s also a new mini-game featured in the unreleased demo called “performance”. Here, Jebat is essentially the stagehand who has to juggle the spotlight, the smoke machine, and the flames. It’s a cute little additional game mode and it’s yet another opportunity for the music to shine.

I scored an A for the performance mini-game

Although the game features certain dark and gritty themes (cough, eating human babies, cough), it doesn’t take itself so seriously that it starts to feel overly heavy.

Rather, one of the charming points of the game is the characters’ dialogue that’s relatable and even humorous at times, which works to further develop each character’s unique identity.

Take Jebat for example. Although overly apologetic, the boy is, um, still a boy. He’s concerned about his missing appendage down south and expresses attraction to the vampiric Pontianak.

Jebat’s internal monologue is rather amusing

It’s even something Raden, a sentient stone frog based on a popular feng shui charm known as the Jin Chan or money frog, pokes fun at with phrases such as “she has the hots for you, boy”.

The juxtaposition between these light-hearted moments and the more ominous, shriek-filled ones, makes the story more approachable and the characters more memorable.

The way the game interweaves the dialogue between each action during the tea ceremony was particularly enjoyable, as it helps set a comfortable pace and mimics real life.

Moral dilemmas are also presented in the game via dialogue trees, which adds a nice layer of intricacy and involvement from the player.

But dialogue aside, the meticulousness behind each character’s design must also be commended. You can tell intensive research and thought were given to all the creatures in Kabaret, but if you need more proof, tweets by Persona Theory will certainly do it.

An interactive and immersive love letter to Southeast Asia

Featuring congkak and guli mini-games alongside a whole dictionary of Malay phrases, Kabaret tells a story of Southeast Asia through a Southeast Asian lens.

I appreciated how the game’s cast of monsters showcases the diversity of folklore in the region while still creating a shared Southeast Asian identity.

While taking heavy inspiration from our legends and culture, the game also manages to have its own voice while telling an original story.

Kabaret is so beautiful visually and aurally

Yes, Kabaret is an encapsulation of Persona Theory’s mission of telling compelling, localised stories, but stripping away all the metaphors, symbolism, and representation, it’s simply a good game.

To be honest, I didn’t expect the new demo to be that much better than the one released on Steam, considering how much I enjoyed that one.

However, I believe the new demo shows that the studio is being more purposeful about the “game” format with Kabaret, adding more interactive elements and choices for the player to explore.

The unreleased demo also seems to have darker and maybe even more disturbing themes, which I’m admittedly excited for.

With everything I experienced in the Kabaret demo, I have to wonder how it didn’t win at LEVEL UP KL, despite nominations in different categories too.

Nonetheless, it’s still a winner in my heart. If I had to pick just one Malaysian game to add to next year’s wishlist, Kabaret is probably my pick.