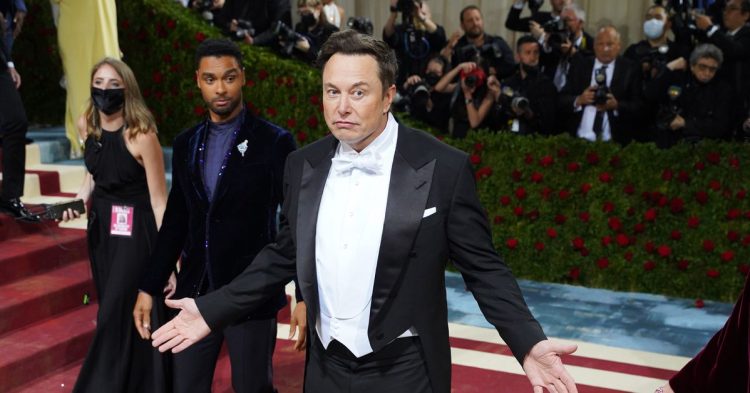 Elon Musk held a giant conference call for advertisers and more than 100,000 other people today. He sounded thoughtful about his plans for Twitter, unsure about how it was all going to work out, but solicitous of feedback. “I only got the keys to the building last Friday,” he said, adding later: “I’m open to ideas.”

The problem for Musk is the advertisers he has spooked since buying Twitter for $44 billion are unlikely to be swayed by any of this. They tell me they don’t mind what Musk says in outreach calls like this. They’re concerned about what he does and what he tweets.

This is a new problem for Musk, who became the world’s richest man by selling electric cars and building rocket ships, and not by caring about what other people think about him. Or, at least, not caring what controversy-hating advertisers think about him.

But now he very much has to. At the moment, advertisers are Twitter’s entire revenue stream, and they aren’t happy with Musk. If he can’t turn that around, he’s in very big trouble.

Peter Kafka reports on the collision of media and technology.

And while Musk has done really impressive stuff in the past — kickstarting the electric car movement with Tesla and private space flight with SpaceX — Twitter is a different animal. While Musk seems to think social media is a relatively trivial problem to solve compared to the engineering feats he’s figured out, he’s now in a very different industry, where lots of his previous experience may not apply at all.

Just as worrisome: He appears to be doing this mostly on his own, improvisationally, with few people around him who are able or willing to tell him that he’s wrong.

You can see an obvious example of this deficit on Twitter (of course) where Musk announced last week that the company had suffered a “massive drop in revenue” because advertisers had begun retreating. In the same note, he blamed the advertiser erosion on pressure from “activist groups,” and later floated a “thermonuclear name & shame” campaign against marketers who pulled their money. That is: he threatened his would-be customers.

Which is exactly the kind of thing advertising executives tell me troubles them about Musk and Twitter — that no matter what he says when he talks to them, they’re worried about his behavior.

“His personal Twitter handle is introducing a level of reputational risk that in my experience, most Fortune 500 companies cannot accept,” says Lou Paskalis, an advertising executive who met with Musk and about 100 other industry officials via a Zoom call last week.

In that call, Paskalis said, Musk had a similar approach to the one he held today: He earnestly engaged with marketers’ questions, emphasized his plan to clean up Twitter by introducing a “mild paywall” of $8 a month for Twitter users who don’t want their content buried, and talked about creating a better advertising experience on the service.

Paskalis says Musk came off well, if a little “naive,” and that he had appeared to placate some advertiser worries. “I think for most of us he moved the ball forward,” Paskalis told me. “He didn’t score a touchdown, but he gained ground.”

The next day, Musk laid off half of Twitter’s workforce, including some number of employees who worked on brand safety — a key advertiser concern. Paskalis asked him about the move on Twitter, and Musk responded by blocking him.

That’s a move out of the Musk playbook — he once refused to sell a Tesla to a customer who complained about Tesla in an open letter — and that has generally worked out fine for him. On today’s call, he suggested that brands and their executives should follow his lead and let loose on Twitter more: “Be more adventurous. That’s what I’ve done with Tesla and SpaceX and it’s worked out quite well.”

But ad execs I’ve talked to strongly disagree. While Musk says that there has to be a distinction between Elon Musk, Twitter user, and Elon Musk, Twitter owner, advertisers won’t see any difference at all. Especially when he’s engaged in stuff like highlighting a gross conspiracy theory about the attack on Paul Pelosi, via a tweet he later deleted, or threatening his advertisers. Who, again, are his customers.

“It’s one thing to see clients and say the right things,” says a former member of Twitter’s sales team, who was laid off last week. “It’s another to see his tweets.” Or, as a different ex-Twitter salesperson told me: “Elon needs to realize that every tweet is a statement of policy.”

Advertisers also say that, contrary to what Musk says, they’re not too worried about pressure from advocacy groups like Media Matters For America and the Anti-Defamation League, who have called on advertisers to pause spending until Musk keeps the existing content policies and infrastructure Twitter had before he bought it.

“[Advertisers] deal with activists all the time,” says an industry veteran who has bought ads from Twitter in the past. “They certainly understand how to stand up to pressure. Him blaming activists? They’re laughing.”

Perhaps the biggest problem for Musk is the asymmetry between himself and his advertisers: He needs them because he owes more than a billion dollars in interest payments a year. But they don’t need him.

Remember that the reason Musk was able to buy Twitter in the first place is that while some people — most certainly Musk — think Twitter is very important, advertisers don’t. It’s a subscale digital ad platform, which is why it’s worth a fraction of Google and Meta — two really important platforms advertisers have to use. And digital advertising is already under pressure, so marketers would be happy to find a reason to pull back spending on Twitter.

Even worse for Musk: Twitter’s advertisers, unlike the ones that rely on Google and Meta, tend to be brand advertisers — ones you’d normally see on TV, as opposed to ones that want you to click a link and take out your credit card. That’s a group of ad buyers that’s way more sensitive to controversy than someone selling, say, app downloads or supplements. “Marketers want predictability,” says a former Twitter ad person. “They don’t want to be fired by their boss.”

At the risk of piling on, that’s not all. Since Twitter’s ad buyers don’t expect massive reach, Twitter has been training them to expect to reach a niche but influential audience: more affluent, more sophisticated, “more left and right coast,” as an ad buyer told me this week. In other words, exactly the kind of audience an advertiser might think would be willing to leave Twitter if Musk’s chaos continues.

Can Musk fix this? Maybe? He is sketching out a future where consumers spend lots of money on Twitter so he won’t be as dependent on ad dollars. He also talks about making ads more appealing on Twitter, and eventually building a “bottom of the funnel” ad business — one that will appeal to the kind of advertisers who use Google and Meta.

But all of that is a long way off. Right now, it’s the world’s richest man and a relatively small group of people who are worried about giving him their ad money. If he wants them on his side, he’s going to have to do more than say the right things — he needs to change who he is. I’m not taking that bet.

Correction, November 9, 5:40 pm ET: An earlier version of this story misidentified an advocacy group. It is the Anti-Defamation League.

How Does Data Modernization Benefits Your Business?