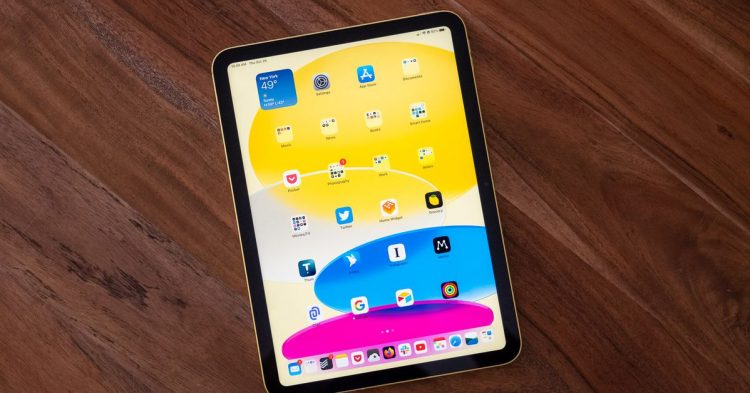 The new iPad is just over two weeks old, but it’s already getting a nice little discount that makes it feel much more price-appropriate. Apple’s 10th-gen iPad is on sale for $399 at B&H Photo in its base 64GB configuration with Wi-Fi. While this new model comes in four different colors, B&H’s $50 discount is only on the blue one — at least, until November 13th at 11:59PM ET when this deal is set to expire (if it doesn’t sell out first).

This new iPad model may not be the no-brainer purchase its base-model forebears have been — since it starts at a much higher price than the ninth-gen version, which is still available for $299 — but it’s got some nice improvements. In addition to some fun colors, the 10th-gen iPad has great battery life and a speedy A14 Bionic processor with plenty of performance headroom for most users. It also made the switch from the outdated Lightning connector to USB-C, and it’s the first iPad to put the front-facing camera in the more optimal horizontal orientation. That all sounds nice, and it is, but it lost the 3.5mm headphone jack in the process. And if you want to draw on it, you’re limited to the first-gen Apple Pencil and an especially cursed charging dongle.

But, hey, $50 off already makes bits and pieces of these factors much more forgivable. Read our review.

Apple’s 10th-gen iPad is the spiritual successor to the older ninth-gen model. Though, in exchange for its revised design, landscape-oriented webcam, USB-C port, larger 10.9-inch screen, and faster processor, it ditched the headphone jack and got more expensive.

If you’re looking to buy any digital games or downloadable content on PlayStation or Xbox, you should check out these discounts Eneba is once again offering for gift cards to each storefront. Similar to the deals we saw last weekend, Eneba is selling a $100 digital gift card to the PlayStation Store for $81.69 (about $18 off) when you use code PSNUS and a $50 Xbox digital gift card for $37.86 (about $12 off) with code XBOX50. Both of these promo codes are good through Monday, November 14th, at 7AM ET. And once again, since Eneba is EU-based, the exchange rate to USD may shift slightly by as much as a dollar or so.

We don’t know if Eneba is making a habit of offering these digital gift card deals every weekend, but for now, it still seems worthwhile to anyone already in the market for buying some digital games — or if you’re stocking up for a purchase later. Remember, you can always get the code from Eneba and redeem it on your PlayStation or Xbox account for a rainy day or future game release later. Bonus points go to anyone who saves money on a gift card and uses it to buy a game on a solid deal.

In addition to games on the Xbox storefront, an Xbox gift card can also be put toward a subscription to Xbox Live or Xbox / PC Game Pass. A digital gift card can be purchased for a value ranging from $1 to $100. Right now, Eneba is selling a $50 digital gift card for $37.86 when you use promo code XBOX50 before 7AM ET on November 14th.

Are you a PC gamer or the type that has their consoles set up at their desk? If so, check out this great deal on the massive 48-inch Gigabyte Aorus 4K OLED — it’s on sale for $899.99 ($600 off) at Amazon and Newegg. First things first, this monitor is a big boy. You have to have ample desk space for all 48 inches of it. If you do, you get an excellent value for a quality OLED panel that supports 120Hz refresh rates, a fast 1ms response time, and AMD FreeSync compatibility to control screen tearing. It’s got two HDMI 2.1 ports in addition to a DisplayPort 1.4 connector, which means it’s set to conveniently take your PC, PlayStation 5, and Xbox Series X all at once.

The Aorus may not be quite as fancy or get as bright as something like LG’s latest C2 OLED, but it offers a lot for anyone who wants to go big for their battlestation setup. Plus, this deal in the past usually required a mail-in rebate, and now you get the great discount instantaneously at the time of purchase.

Gigabyte’s foray into OLED panels is this 48-inch model that has similar features to LG’s pricier C1 and C2, namely its two HDMI 2.1 ports that allow for fast gaming at 4K.

Speaking of the LG C2, the 42-inch version is currently on sale for $996.99 at Amazon, or for $999.99 at Best Buy and Target. That discount of about $300 makes this an excellent value for anyone seeking a quality panel in a small space or, like the Aorus deal above, living that big monitor life. We featured this similar price from BuyDig earlier this week when it also came with a free $100 Visa gift card. And while that promo has ended, this is still a great get for anyone in the market.

The LG C2 may not be terribly different than the last-gen C1, but it maintains a winning formula for gamers using the latest consoles or any movie fans who want a TV capable of displaying deep, dark blacks with clarity. It has HDMI 2.1 support across all four of its inputs, and it supports 120Hz refresh rate with VRR — which is ideal for games that look beautiful but have the occasional framerate drop (like Elden Ring). The C2 also runs LG’s WebOS interface for directly streaming Netflix, Disney Plus, Hulu, and more, though its HDR and HDMI 2.1 support mean it’s great with whatever top-tier streaming device you choose.

The LG C2 is available in a 42-inch configuration and is both lighter and brighter than its last-gen predecessor, the C1. It also boasts a “dark room” setting to reduce eyestrain as well as the ability to log in to different user profiles.

No, we’re not done yet. Here are some more deals

How to Enable Dark Mode for Google Chrome