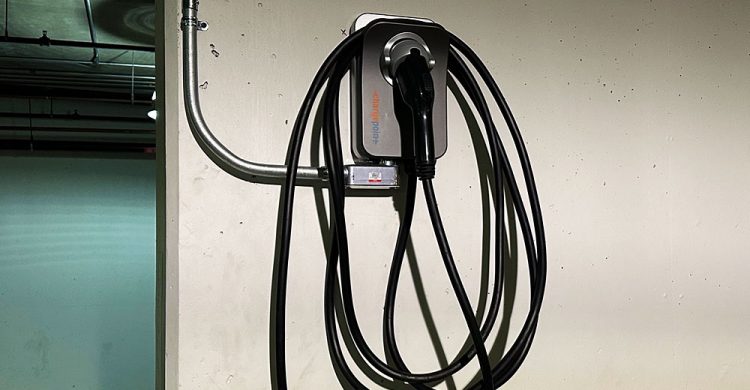 For the last year, I’ve contemplated installing an electric vehicle (EV) charger in my multi-dwelling condo in San Jose. Mind you; I don’t yet have an EV. But I have friends with EVs who frequently visit, so I figured it could be beneficial and convenient for others. Furthermore, I believe an EV charger couldn’t hurt from a condo resale standpoint if I decide to move from the Golden State.

Let’s face it: the electric vehicle market is proliferating at a rapid pace, projected to grow at a CAGR of nearly 22% from 2022 to 2030. When a new demand grows, good things happen; more models of EVs from new brands, spanning broader price points with more choices and styles, appear in the market.

In August, Congress passed climate legislation with significant tax rebates that, over time, are expected to make some EVs more affordable to purchase.

So, with a future-proof mindset, I decided to embark on installing an EV charger in the garage of my condominium complex. Here is the story of my “journey” to install the EV charger. Consider this a forewarning if you live in a condo building.

Why Do You Need an EV Charger at Home?

One might ask why one needs an EV charger at home when so many are showing up at shopping malls, public venues, and offices. After all, the Bipartisan Infrastructure Law has dedicated $7.5 billion to build a nationwide network of 500,000 chargers so that charging is “predictable, reliable, and accessible.”

Regardless, I believe most Americans considering an EV will desire an in-home charger in their home, building, or condo garage. It’s hard to overcome the convenience of filling up one’s car at the pump in a few minutes versus spending 45 minutes at a supercharger to store enough juice to travel 200 miles or so if your vehicle has a low charge.

What’s more, the feedback I’ve gotten from people in my building with EVs but without chargers rue the inconvenience of having to wake up early in the morning to charge their cars, even though Tesla has banks of “superchargers” in a nearby garage less than 250 feet from my building. Convenience is a big deal for most consumers trying to overcome a century of combustion engines’ advantages.

Given all of that, in early June, I set out to begin the process of installing an EV charger in my condo’s building. Recognizing that about ten cars in the garage already had EV chargers installed, I didn’t believe it would be a Herculean undertaking.

Not Elon Musk’s plan to Land on Mars, but the initial schematic of the EV charger installation (Image Credit: SmartTech Research)

To streamline the installation process, I decided to utilize ChargePoint’s information services available to businesses, fleet operators, and homeowners on the company’s website. ChargePoint is a leader in the EV charger space and provides excellent guidance to individuals like me who need as much handholding as possible.

While ChargePoint’s website does an outstanding job of preparing customers for the installation, it ultimately referred me to Qmerit, a company that is solely focused on the installation of EV chargers.

Qmerit provides its own online “wizard” that asks about your service, location, vehicle and property, and load calculation (which is critical to determining if your home or building can handle the EV charger load).

You also need to submit photos that will help Qmerit understand your installation requirements to provide an accurate estimate, for which Qmerit charges a $149 flat rate that would be deducted from the completed project cost.

Here’s where the fun began.

After getting an estimate from Qmerit, it referred me to several local EV charger installation contractors for follow-up. Several of them expressed little interest in taking on my project as they were either too busy with larger projects or didn’t have time for an on-site visit to verify the installation requirements.

Two installers did reach back out to me. The first came out and provided me with a non-negotiable estimate of $4,000 plus the cost of the charger itself. That quote appeared exorbitantly high, so I respectfully passed.

Things appeared brighter a few days later when a second contractor, NRG Electric, gave me a much more reasonable quote of under $3,000, excluding the charger (which I supplied) but including a $250 permit fee from the City of San Jose.

Putting cost aside, I thought the most significant hurdle I would face was getting approval from my homeowners association. But NRG did a terrific job coming up with a proposal the HOA approved in less than 48 hours.

The City of San Jose was a dramatically different story. Despite applying for a permit in mid-July, NRG informed me that San Jose would not be able to “review” my proposal until mid-September — 60 days after its submission.

Flash forward to late September when NRG received word that the city approved the proposal. It’s still a mystery why the proposal took so long to get approved, as the building already had the precedent of multiple previously installed EV chargers.

The installation finally occurred in early October. The two technicians from NRG Electric did a thoroughly professional job installing a direct power line from the building’s electric room, which, fortunately, is less than 100 feet from my parking space. It did require that my unit’s power be turned off a couple of times during the all-day installation process, but for the most part, it went without a hitch.

The charger that I installed, the ChargePoint Home Flex, is currently available from Amazon at $749, though keep in mind that prices for EV chargers tend to fluctuate based on demand.

It is a Level 2 charger that supports up to 50 amps (which my building’s electrical panel provides), allowing me to add 37 miles per hour in charge capability, providing more than 200 road miles after only six hours of charge time. To achieve these faster charge times, the Home Flex requires a 240-volt connection — the same as a conventional clothes dryer.

On the downside, since my garage doesn’t have Wi-Fi connectivity, I can’t take advantage of the Home Flex’s online features like schedule setting when electricity is cheapest, Alexa voice control, or reminders so I never forget when to plug in.

More critically, there is no way for me to secure the charger from others who might want to charge their cars when I’m not home, so I ended up resorting to a $20 bicycle padlock to secure the charging handle from unauthorized individuals.

While single-family homeowners are likely to have a smoother EV charger installation experience, because the process is less regulated than for a multi-unit dwelling (at least in California), I was shocked at how much time was required to get the necessary permit.

Understandably, these permit regulations are in place for safety reasons because most of today’s multi-unit condos and apartment buildings were not built with EV charger installs in mind. Still, 60 days is laughingly excessive, particularly in a state like California that sees itself as the vanguard of the EV phenomenon.

We’re also talking about a non-trivial market. As of late 2021, in the U.S., there are nearly 5.2 million multifamily residential buildings (including everything from duplexes to large high-rises) containing 40 million housing units. States and cities must do a better job of streamlining the EV installation process from weeks to days.

Finally, there is the subject of cost. With gasoline approaching $7 per gallon today in California, more people are taking the EV plunge, even though the average price of an electric vehicle is around $66,000.

Add an average of $4,000 for the EV charger, installation, permitting, and the total cost becomes almost prohibitive. Indeed, companies like ChargePoint are doing their best to simplify the process and reduce the hardware cost. Nonetheless, the government needs to do a much better job of shortening the timelines.

The bottom line is that I would never have guessed that the simple installation of an EV charger in my condo building would have taken nearly three months. Sadly, I suspect my experience is not uncommon.